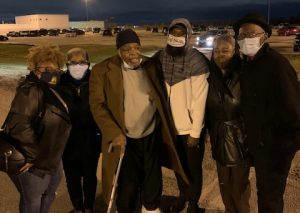 Robert Smith, a torture victim at the hands of the Chicago Police Department, is pictured here on the night he was released from prison on Oct. 23, 2020. Smith, who was imprisoned for 33 years, filed a civil lawsuit this week against the city and former CPD officers. (Photo provided by Robert Smith’s attorneys)

SPRINGFIELD — One of the men who was tortured into giving a false confession by officers working under late Chicago Police Commander Jon Burge is suing the city and its former police officers for more than $66 million in damages.

Robert Smith, who was wrongfully convicted for a 1987 double murder, spent more than 33 years in prison but was declared innocent in November after successfully filing a claim with the state agency tasked with investigating police torture claims committed during Burge’s tenure, the Illinois Torture Inquiry and Relief Commission, in 2011.

The Illinois Torture Inquiry and Relief Commission, which was established by the state General Assembly in 2009, allows individuals to pursue torture claims in the court system that would otherwise be prevented by the statute of limitations. Claims evaluated by the commission must involve allegations that police tortured an individual to obtain a confession if that confession was then used to convict the individual.

The General Assembly expanded the commission’s scope in 2016 to include all claims of police torture, not only those committed by Burge and his associates.

Smith’s lawsuit claims the officers’ use of torture to coerce his confession and their fabrication of evidence at his trial amounts to a violation of his constitutional rights.

Burge, a Chicago Police Department Violent Crimes lieutenant, was fired in 1993 after the Chicago Police Board ruled that he had used torture on crime suspects in his precincts. He was convicted of perjury in 2010 for lying about torturing suspects, and was sentenced in 4 ½ years in prison. He died in 2018.

The eight-person Torture Inquiry and Relief Commission — comprised of retired judges, attorneys and members of the public — determines whether “there is sufficient credible evidence of torture” to warrant review by the courts. If the claims are deemed credible, the commission can issue a report on the claim and file the report with the local circuit court.

Smith’s case is one of 34 claims that have been referred to court for further judicial review while 101 claims have been denied or summarily dismissed, according to TIRC Executive Director Rob Olmstead. The commission has approximately 515 open claims remaining, according to Olmstead.

Smith, 72, was imprisoned for the Sept. 19, 1987, double murders of his wife’s mother and grandmother, who were found with their throats slit in their home, on the city’s south side, which had been set on fire when police arrived on the scene.

Chicago police officers arrested Smith that same day and he was interrogated for about 19 hours.

During his interrogation, Smith was beaten, kicked in the head, choked, slapped in the head and threatened with further violence, according to the TIRC report in Smith’s case.

He agreed to the written confession provided by the officers, but refused to sign the document. Although unsigned, state prosecutors used his confession against him at trial.

Smith was convicted at his trial in August 1990 and sentenced to life in prison.

In July 2013, the TIRC ruled his torture claim was credible, and submitted its report on his case to the Cook County Circuit Court, which finally vacated Smith’s murder conviction in October 2020.

“No amount of money will constitute ‘justice’ for what the defendants did to Robert Smith (which the system then ignored and covered up for 33 years) but the City could at least help bend the arc of the moral universe in that direction by admitting what these defendants did and compensating Robert for the 33 years of his life that were lost,” Chanen said in a news release.

A spokesperson for the city Department of Law said the department is reviewing the lawsuit and does not have a comment at this time.