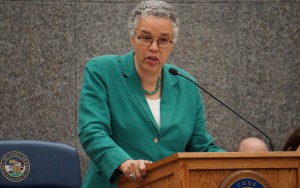 Cleaning up police misconduct in Chicago falls outside of her authority as Cook County Board president, but Toni Preckwinkle is not afraid to speak out about the issue.

The board president, who served 19 years as a Chicago alderman, said last week that she is troubled by the city’s slow movement in making changes to police training, as well as its police practices and procedures. She said she was not surprised by the findings in the U.S. Department of Justice’s scathing report on the Chicago Police Department and that the report is a sobering reminder of the challenges facing the city.

“Officers are not trained properly. That’s clear from the report,” Preckwinkle said. “Examples include a training tape that’s 35 years old, young officers get out of the academy and are placed in the most challenging districts, there’s no policy on foot pursuits. We have to do better.

“It makes little difference who the superintendent is if the rank and file and commanding officers are understaffed and their supervisors lack managerial skills. The Laquan McDonald case is just one example of the failings of the Police Department to police itself. How could it be that so many of the reports of officers on the scene mirrored exactly that of Officer (Jason) Van Dyke? When you look at the video, clearly you look at the narrative as a lie.”

McDonald was the 17-year-old shot 16 times in October 2014 when, although he had a knife, was walking away from the scene. Van Dyke has been charged with first-degree murder in the case.

Preckwinkle, who moved to Chicago in the 1960s, said ever since her arrival the city has had issues with racism in the ranks of the Police Department.

“There’s a pervasive racism that afflicts the department institutionally and too many of its officers individually,” the board president said.

As an alderman who worked with personnel in two Chicago police districts, she said, she found that the overwhelming majority of officers on the Chicago force are upstanding individuals.

“Ninety-five percent of our officers are good and decent people who work very hard every day at a very difficult job,” Preckwinkle said.

She said the Justice Department report, which ripped the Chicago department’s handling of black residents, is a chance to hit the reset button on police-community relations in the city.

Preckwinkle said that Chicago Mayor Rahm Emanuel inherited a police department that was very troubled, but added that she wishes Emanuel would have addressed some of the department’s problems earlier than the McDonald incident.

She said U.S. Attorney General nominee Jeff Sessions has a troubled past when it comes to racial issues. Based on that past, she said, she is unclear if Sessions would hold the city accountable for its abuses of blacks via the Police Department.

The former alderman said the city would be wise to find the money for more and better police training instead of continuing to issue checks in lawsuit settlements for wrongful arrests and people injured and killed at the hands of the police.

“It seems to me if you look at the amount of money that the city has paid in the last decade in these kind of settlements and weigh it up against what is costs to approve training that it is a cheaper investment to approve training at considerable cost than to pay these significant settlements to the families of those who were shot and killed by police or those who are wrongfully convicted,” Preckwinkle said.

She noted the she has taken upon herself since taking the leadership post for Cook County to reform the county’s criminal justice system, both institutionally and by changing the actors involved.

“On the actors’ side, I appointed Amy Campanelli to be our public defender. She’s a passionate advocate for her clients and for her staff. I worked hard to elect Kim Foxx state’s attorney because I thought there was a great need,” Preckwinkle said.

Preckwinkle cited institutional changes in bond court that have helped reduce the population at Cook County Jail. She said 93 percent of individuals being held in the jail are awaiting trial, and of that 93 percent, 70 percent of them are charged with non-violent crimes.

“We have detained in this county significant numbers of people for things like having a few joints in their pocket, shoplifting, not paying their child support, not paying their traffic tickets,” Preckwinkle said. “I don’t think those people need to spend the time between their arraignment in bond court and the disposition of their cases in jail. That’s a waste of taxpayer dollars.”

— Preckwinkle to Chicago: Pay for police training or pay settlements —