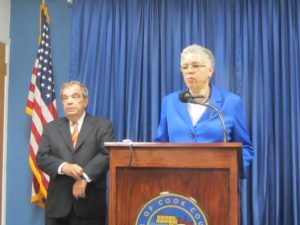 Cook County Board President Toni Preckwinkle is calling on the Trump administration and members of Congress to advocate against civil immigration arrests in courthouses, citing they pose a threat to public safety.

In January, the administration of President Donald Trump issued guidance directing immigration officers to make civil arrests in courthouses and claimed it would improve public safety.

Christian Gomez Garcia, a recipient of Deferred Action for Childhood Arrivals protections, was recently detained at the Cook County courthouse in Skokie when he appeared for a minor traffic violation.

“I am concerned that the Trump administration’s new shift in policy — to prioritize courthouse arrests — could threaten public safety by discouraging individuals from engaging with the criminal justice system, from serving as witnesses, to showing up, as did Christian, to a court date for a minor traffic violation,” Preckwinkle said. “We are all safer when everyone in Cook County feels comfortable using our court system and believes in justice.”

The County Board president said that the shift in federal policy likely achieves the opposite of what the Trump administration claims. She said detentions intimidate immigrants from engaging with the criminal justice system, which the county has an obligation to maintain for the benefit of all residents.

Preckwinkle said by increasing civil immigration enforcement in courthouses, the Trump administration could discourage immigrants from being involved in courthouse cases. She said a lack of participation from all individuals is a threat to the greater safety of all residents.

The board president has issued a proclamation urging federal officials to designate courthouses as “sensitive locations,” a designation that already applies to schools, hospitals and places of worship. Preckwinkle said the proclamation encourages Immigration and Customs Enforcement officers from making civil arrests in courthouses.

“Make no mistake, these measures from the Trump administration are designed to intimidate immigrant communities, to force people back into the shadows,” Preckwinkle said. “One of the most important things a public official like me can do in this precarious moment in time is to let immigrant communities know that we support them.”

The County Board president said political shorthand is often used either deliberately or inadvertently, dehumanizing immigrants.

“DACA recipients or Dreamers, young people who were brought to this country as children and who have only known America as their home, are more than just the titles we’ve given them,” Preckwinkle said. “They are students. They are doctors. They are lawyers. They are military service members. They are friends. They are neighbors. They are loyal sons and daughters, brothers and sisters. They are dedicated contributors to our county; and they are, by almost every measure, Americans.

“Deporting them, after our country promised to protect them, is wrong; and our county would be worse for it.”