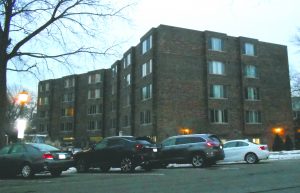 One of the few apartment buildings in Wilmette that rents to tenants with Housing Choice Vouchers. (Photo by Igor Studenkov/for Chronicle Media)

That’s when the Housing Authority of Cook County came in. Since 2016, its Community Choice Program has been helping residents eligible for Housing Choice Vouchers to find apartments in “Opportunity Areas” — communities containing “some of the top performing neighborhoods” throughout suburban Cook County. Within about two months, it was able to find her an apartment in the Village of Schaumburg.

For the past three years, CCP has been able to help hundreds of residents. HACC spokesperson Nicholas Mathiowdis said that 2018 has been especially successfully placing more residents than before. But when asked what could be done to make the program better, he said that they could use more money to hire counselors, as well as more help from the individual suburbs.

HACC provides affordable housing in the majority of the suburban Cook County except Oak Park, Maywood, Park Forest and Cicero, which have housing authorities of their own. Like other housing authorities, it operates public housing developments for families, seniors and people with disabilities. It also administers the federal Housing Choice “Section 8” Voucher program on the local level. The program includes project-based vouchers, where clients get a voucher to live in a specific private development, and more general vouchers that can be used in any apartment where a landlord is willing to take them. Either way, the tenants pay 30 percent of the income, with HACC using federal funds to cover the rest.

The U.S. government shutdown resulted in HACC unable to use those funds. The housing authority’s website notes that it would continue making rental payments “in foreseeable future” and that it would let landlords and property managers know if “if any payment delays are expected.”

Much of the HACC housing geared toward low-income families is located in the south suburbs and traditionally working class near-western suburbs, with a few developments and “scattered site” housing located in suburbs such as Des Plaines, Franklin Park, Evanston and Wheeling. The housing for seniors and people with disabilities, whether it’s public housing or private housing that accept project-based vouchers, are more evenly distributed, but there are still many suburbs north, northwest and west of Chicago where HACC presence is minimal.

When it comes to families, housing authorities have increasingly been shifting away from public housing and more toward the vouchers. This has been billed as a way to expand housing options and avoiding concentrating low-income residents in certain areas. But, in practice, the voucher holders can’t just use their vouchers anywhere they want. The landlord must be willing to rent to them, and the rent that housing authorities can subsidize is capped based on the what U.S. Department of Housing and Urban Development calculates as the area’s “fair market rent.” It is estimated based on the average rents of the local metropolitan areas — in this case, the entire Cook County. But, as the May 2018 Chicago magazine article noted, the issue is that some municipalities are more well off than others, so some suburbs have few, if any units that the vouchers can cover even if all of the landlords were willing to participate.

HACC’s Community Choice Program, which is also known as the Mobility Program, was designed to help address the issue. It helps voucher holders find housing in “Opportunity Areas.” It includes every single North Shore suburb within the county, as well as most northwestern and western suburbs and south suburbs of Bedford Park, Orland Hills, Palos Heights, Palos Park and Willow Springs. It also includes ZIP codes in certain suburbs that aren’t on the above lists. It should be noted that, according to the map on the HACC website, it doesn’t include much of unincorporated Cook County that is surrounded by suburbs that are part of opportunity areas. For example, in Maine Township, Park Ridge, Niles, Morton Grove, Glenview and certain ZIP codes within Des Plaines are opportunity areas, but unincorporated portions of the township that have Des Plaines and Glenview ZIP codes aren’t. 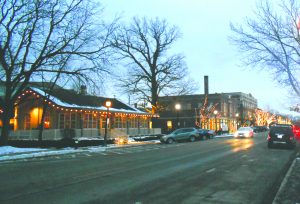 HACC mobility counselors work with voucher holders, helping them find units that are available and landlords that might be willing to make their units available. The housing authority also provides transportation to the apartments, helps them access their credit reports, offers workshops on topics such as financial literacy as tenant rights and responsibilities, and even helps them cover their security deposits at up to $1,000 per client.

Anderson said that, for her, the process took around two months. She said it was “constantly stressful,” especially at first, so she was glad that a housing counselor was there to help.

“The counselor was sending out emails to me for places that were available, and I was able to ask — if I needed an extension as far as the time.” Anderson said. “It was nice to have somebody I could go back and forth it. And the paperwork was pretty simple.”

Mathiowdis said that HACC offers additional incentives to the landlords to get them involved in CCP. HACC has to inspect any unit that gets rented to a voucher holder — a process that, he said, can normally take up to two to three weeks.

“For landlords going through the process in CCP, the paperwork process is handled directly by the mobility counselors and can be completed in one to two days, [assuming] the landlord and client have everything in order.” Mathiowdis explained

CCP councilors also hold workshops for landlords and realtors in opportunity areas in order to make the process “more accessible.”

Mathiowdis also noted that one thing that helped HACC increase the pool of available apartments is HUD’s Small Area Fair Market Rent Demonstration pilot program. Under this program, the fair market rent is measured based on the ZIP code, so it can be better reflect the average rents in the area.

Anderson said that she is happy with how the move turned out. She said she enjoys her neighborhood’s quiet, family friendly atmosphere.

“[My daughter and I] met lots of friends,” Anderson said.” It’s really a good opportunity of us to live in a very family orientated neighborhood and I’m happy for that.”

While she said she had reservations about moving her daughter to a new school when she was in the middle of third grade, Anderson said it worked out pretty well.

“She was in third grade — she is in sixth now — but she adjusted pretty quickly,” she said.

Anderson said that it helped that they were able to make connections through their local church. They also appreciated Schaumburg’s parks, sledding hills and other amenities.

But while Mathiowdis said HACC was proud of the program’s successes, there were several things that could be done to make it better. First and foremost, he said, the housing authority could use more federal funding allocated specifically for the program.

“This would allow us to hire more mobility counselors [beyond the three we already have], which would mean more mobility workshops for residents, even quicker lease-up timelines, greater security deposit incentives, a dedicated supportive resource coordinator, a dedicated landlord liaison, etc,” he said. “There are a ton of things we could do with more funding.”

Mathiowdis also said that credit scores are a major obstacle for voucher holders trying to move into opportunity areas.

“If we could find a way to partner with credit agencies or financial institutions to better help our clients navigate that, it would lead to fewer participants being denied by landlords based on credit score,” he said.

Finally, while some municipalities have worked with HACC to help CCP clients find housing, many have not.

“More buy-in from municipalities would be great,” Mathiowdis said. “Whether it’s assistance in school placement, supportive services, etc., this would help new residents adjust to their new communities more smoothly.”

Anderson reflected that CCP was great not just for her, but for many families in her situation — especially minority families.

“Sometimes, single-[parent] families, they may be forced to live in a certain area, because it’s the only one they can afford,” she said. “And that area that may not be safe, [it might have] high crime, and apartments that are just not very good. So just to have the opportunity to move, it’s a better change for the kids. Now, it’s like they have two parents.”