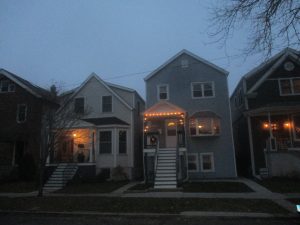 The Albany Park Initiative, the first project to get financial assistance through PEAR program, rehabilitated 18 buildings, including this Bowmansville building (right). While its three-bedroom unit is market-rate, its two-bedroom has its rent set to be affordable to tenants earning 60 percent of the area median income.

On March 28, the City of Chicago’s Department of Planning and Development quietly launched a program designed to keep at least some apartments affordable in neighborhoods where gentrification is either already driving the property values up or where it may happen soon. Preservation of Existing Affordable Rental (PEAR) program offers loans to developers looking to either buy buildings or refinance existing debt. In return, the developers are required to keep at least 20 percent of the units affordable for at least 30 years. Even if the ownership changes, the requirement will stay in place.

So far, it has only been used to help the Albany Park Initiative, which helped cover the costs involved in purchasing 18 small rental buildings throughout the city. While 42 units were rehabbed, only 14 of those units have the rents capped to be affordable. DPD intends to keep the program going as part of the broader effort to address displacement issues. But many housing advocates have raised concerns that the funding wasn’t nearly adequate enough to address the growing affordable housing shortage.

During the Aug. 1 meeting of the City Council’s Committee on Housing and Real Estate, where DPD officials presented a quarterly review of the city housing plan, many aldermen expressed concerns about gentrification leading to displacement of older, less well-off residents. As a neighborhood’s reputation improves, it attracts more development, which drives up property values and, with it, property taxes in the surrounding areas. Homeowners have trouble keeping their homes, and landlords are more likely to either increase rents themselves or sell their apartments to developers that increase rents. While the aldermen on the committee agreed that they wanted development, they didn’t want to displace residents in the process, either.

Ald. Deb Mell (33rd Ward), whose ward includes a significant portion of Albany Park, lamented what she called a Catch-22. There are buildings in her ward that offer affordable rents, but they have building code issues that need to be addressed. The problem, Mell said, is that bringing the building up to code costs money, and many landlords find it easier to simply sell the building to a developer looking for properties in a “hot” neighborhood.

“What happens is the developer buys the building, rehabs the buildings and jacks the prices up,” Mell said. “I can ask inspectors to go into buildings that look like they’re not safe, but it’s a tough position, because [the landlords] get hit with a bunch of fines, they go make improvements, and they look for a developer. And it’s frustrating.”

This is the issue PEAR program is designed to address.

The program took a cue from Renters Organizing Ourselves to Stay (ROOTS), a program operated by Communities United, an Albany Park based community advocacy organization. Until 2014, it was known as the Albany Park Neighborhood Council. According to Diane Limas, who currently serves as Community United executive board president, ROOTS started out as a response to the foreclosure crisis. APNC kept hearing about tenants who paid their rent on time only to find an eviction notice on their door because either, unbeknownst to them, their landlord defaulted on the mortgage, or the bank that wound up owning the building through foreclosure didn’t want the trouble of being a landlord. 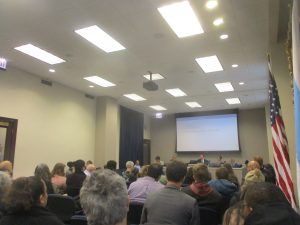 APNC lobbied to strengthen protection for renters who wind up in situations like this, ultimately helping to push the city to adopt the Keep Chicago Renting ordinance. But while Limas said it was a huge victory, another issue soon reared its head.

“Investors started coming into our neighborhood, buying two- to four-unit properties and converting them into single-family homes,” she said. “So not only were we losing affordable rental stock, we were losing rental stock in general.”

While there were “mission-orientated” developers who might have been willing to buy the buildings and keeping them affordable, the private developers could pay landlords more. So, after brainstorming the issue, they came up with ROOTS as it exists today. They teamed up with Chicago Metropolitan Housing Development Corporation, a Loop-based affordable housing developer, and Enterprise Community Partners, a Columbia, Maryland based nonprofit that, among other things, offers financing for affordable housing. Communities United drew upon its list of foreclosed properties, while Enterprise provided the funding to let CMHDC buy the properties. CMHDC then rehabs those properties and keeps them affordable. The Cook County Land Bank, where Limas sits on the board of directors, does what it can to help the effort.

PEAR follows a similar model. It uses funds from the Chicago Affordable Housing Opportunity Fund, which uses money developers pay in lieu of putting affordable housing in their properties, to help developers buy rental buildings. In return, they must keep at least 20 percent of all units in the acquired buildings affordable to renters earning no more than 80 percent of the Area Median Income for at least 30 years.

The very first project financed through the PEAR program was Albany Park Initiative, which was an extension of ROOTS project. DPD gave CMHDC a $2 million interest-free loan to repay the debt it got settled with when it acquired several small properties all across Chicago. According to DPD’s 2018 First Quarter report on Chicago’s 2014-18 Housing Plan, the loan will save the developer $125,000 per year.

According to the same report, CMHDC rehabbed a total of 42 units spread across 18 duplexes, two-flats, and other small multi-unit buildings. While some of those buildings were in Albany Park, others can be found as far west as Galewood and Austin, as far north as West Ridge, as well as in Northwest Side neighborhoods such as Logan Square, Bowmansville, Portage Park and Belmont Cragin. All of the communities have either already seen gentrification or are expected to face gentrification soon. For example, during the Aug. 1 meeting, Ald. Walter Burnett (27th Ward) argued that the Austin community area, which includes both Austin and Galewood, may be ripe for gentrification due to its proximity to the village of Oak Park.

Out of 42 units, 10 units have their rents capped at 80 percent AMI and four units have rents capped at 60 percent AMI. The remaining units are listed as “market rate,” though in practice, that doesn’t necessarily mean their rents are higher than AMI-capped rents. For example, one building in the 2100 block of N. LeClaire building in Belmont Cragin, the rent for the two-bedroom unit is listed as $1,375, while a rent for a three-bedroom unit is listed as $875.

In most two-unit buildings that got rehabbed, one unit was kept affordable and one unit was kept at market rate, but it isn’t always the case. For example, all units at the three-unit building in Belmont Cragin, in the  5800 block of W. Diversey Ave., have the rents set at 80 percent AMI. In some cases, the opposite is true. For example, in Portage Park, both units in a building in the 5300 block of W. Berenice Ave. have the rents set at market rate. And, unlike the LeClaire building, there isn’t a drastic difference between the rents.

Either way, the majority of the units are either two bedrooms or three bedrooms. And according to a City of Chicago press release, CMHDC’s renovations included “new kitchens and baths, refinished hardwood flooring, painting, and updated building systems, in addition to other improvements.”

So far, the Albany Park Initiative was the only project funded through PEAR. But the next City of Chicago Five-Year Housing Plan, which will run from 2019-23, places emphasis on preserving affordable housing in areas that might be endangered, and spotlights PEAR as one of the strategies the city is looking to expand in order to achieve it both “high-cost” and “moderate-cost” areas.

However, when the Housing Committee reviewed the plan during its Dec. 6 meeting, a number of affordable housing advocates, including Communities United, expressed concerns about the budget, arguing that it wasn’t nearly enough to meet the housing needs.

“40 percent of local homeowners and 30 percent of renters are severely cost-burdened,” said Ernie Lukazik, a housing organizer at Belmont Cragin-based Northwest Housing Resource Center. “We appreciate many statements in the narrative of the housing plan, but the budget and the programming , as has been stated here, do not meet the needs.”

“There’s nothing there that mandates that only the amount recommended [has to be spent],” he said. “The new council and the new mayor can decide to add new resources later on.”

In the end, the committee unanimously approved the plan as is — and the Chicago City Council gave it a final approval during its Dec. 12 meeting.

During a follow-up interview with the Chronicle, Limas said that she supported PEAR, saying that she has seen first-hand that the alternative was displacement. And she said that ROOTS is looking to address the issue more proactively.

“We’re working with DePaul Housing Institute [on] trying to identity buildings in the city [neighborhoods] that have started to gentrify,” she said. “Because if we’re already in the middle of gentrifying, properties are so [expensive] mission-minded developers can’t afford it. But if we can identify areas that are just starting to gentry, mission-minded developers can go in and buy them cheaper.”