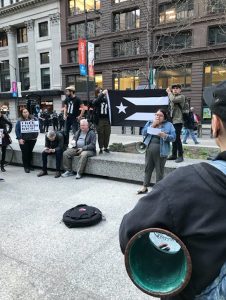 Protesters show their support for Puerto Rican people who clashed with police on May Day (May 1). (Photo courtesy of Cruz Bonlarron Martinez)

Although more than 2,000 miles away, individuals in Chicago stood in solidarity last week with residents of Puerto Rico.

Stating that the police are a repressive tool in Puerto Rico, protesters rallied May 7 at Federal Plaza in Downtown Chicago.

Cruz Bonlarron Martinez, one of the organizers of the Chicago protest against political repression in Puerto Rico, said that police in the country have a long history of abuse and corruption.

“They have been at the forefront of the persecution, censorship, and even assassination of activists and community organizers,” Martinez said. “Racist, sexist, ablest, anti-poor, trans and homophobic, and the list goes on. The police are a repressive tool that protects only the rich and their banks.”

On May Day (May 1) protesters took to Puerto Rico’s Financial District and planned to head down Ponce de Leon Avenue, where a series of financial institutions stand. Police blocked protesters from going down the street, creating a standoff in which police eventually used tear gas and flash grenades to disperse the crowd.

The protest, planned for International Workers’ Day, sought to draw attention to the country’s financial woes, which were exasperated by hurricanes Irma and Maria and have forced the country’s government to lay off thousands of public workers and close schools.

A federal judge has called for an investigation into the police’s handling of the protest.

“For (two) hours, they threw big rocks, balls with abrasive liquid content and others toward the police,” the spokeswoman told Mother Jones magazine, adding that the demonstrators were given a chance to disperse before police cleared the area. “This was a small group and doesn’t represent the majority of the people that were marching.” 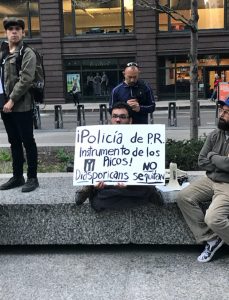 A protester holds a sign saying the police in Puerto Rico are tools of the rich. (Photo courtesy of Cruz Bonlarron Martinez)

Martinez said that police gassed children and elderly residents, beat protesters and broke into people’s homes without warrants as a way to intimidate the movement against austerity.

Chicago protesters marched to the Board of Trade to “let the international bankers and financiers know that the struggle against their dictatorship has no boundaries and that police will not stop us,” Martinez said.

Protesters, which included members of the Chicago Teachers Union Latinx Caucus, called themselves the Chicago Boricua Resistance. Other groups participating in the rally included Anakbayan Chicago, the Chicago Alliance Against Racist and Political Repression, the Chicago Dyke March and the U.S. Palestinian Community Network-Chicago.

“We understand this as a larger political offensive by U.S. imperialism and the capitalist class against oppressed nationalities and colonized people,” Martinez said. “The tactics against protesters in Puerto Rico are inspired by the tactics used by U.S. imperialism abroad in the Philippines and Palestine. They are similar to the tactics used here in Chicago to repress and criminalize working-class black and Latino communities.”

Martinez said protesters “stand in solidarity with the Puerto Rican people against the repression of the Puerto Rico police, which the American Civil Liberties Union has labeled the most corrupt police force under the U.S. flag.”

According to Martinez, the government has destroyed and privatized what is left of Puerto Rico’s infrastructure and robbed the Puerto Rican working class in the name of austerity.