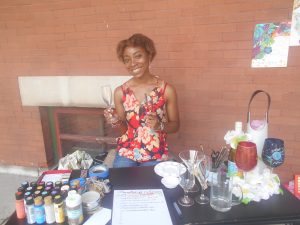 The Pullman neighborhood on the Far South Side is usually known for two things — its history as a pioneering company town for the eponymous railcar manufacturer and the Pullman porters.

It was this history that helped the neighborhood earn the national monument status.

But the Pullman Arts Walk, which took place on Sept. 15 spotlighted another side of Pulman — its vibrant artistic community.

Local artists who spoke to the Chronicle touted the neighborhood’s diversity, the atmosphere of small town comradery and the inspiration its history and architecture provides.

Now in its second year, the event is part art fair, part house walk, with artists from the surrounding neighborhoods setting up booths at Pullman’s Arcade Park and local artists sharing their work in their homes and back yards. The organizers hope that the art walk would become a major South Side art event on par with large art fairs on the North Side. They are keenly aware that there are artists all across the South Side who relish a chance to sell their work closer to home, and they want to be that venue.

The art walk is organized by PullmanArts, a nonprofit organization. Founded in 2010 by a group of neighborhood artists, it works to support and promote local artists. They are working with ArtSpace, a Minneapolis-based developer of affordable artist housing, and Chicago Neighborhood Initiatives, a Pullman-based economic development organization, to build Pullman ArtSpace Lofts. The project is currently under construction, and it is expected to open in 2020.

Erica Roewade, PullmanArts president, said that they organized the art walk to help support artists from Pullman and other nearby neighborhoods. 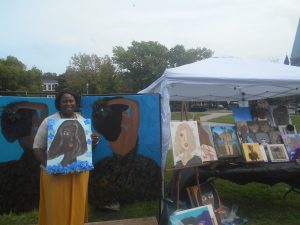 Rolanda Hudson, of Riverdale, said she was glad to have an opportunity to take part in a South Side art event. (Photo by Igor Studenkov/for Chronicle Media)

“Pullman has, for a long time, been an artist community,” she said. “A lot of artists, singers and dancers live here. We felt it was worthwhile to create an official venue, not only for Pullman residents, but for the South Side [in general].”

Roewade said that the first art walk attracted around 60-70 people. While she didn’t know the exact numbers at the time, attendance clearly exceeded expectations — by 1 p.m., the organization’s tent ran out of the walk maps, so volunteers had to scramble to get more.

The Arcade Park served as a starting point, where visitors could get information about the event and Pullman in general. Most Pullman artists either invited visitors to their homes or set up art in their yards. A few artists set up tents and tables.

In conversations with Pullman artists, several common themes emerged. All the artists appreciated that the local art scene was racially and ethnically diverse. Several touted the sheer variety of disciplines in the neighborhood. All this variety and the friendly atmosphere, the artists said, makes them feel welcome and free to be themselves.

Dee Smith, a Pullman resident since 2011, sculpts using clay, which, she noted, is ironic, since  when she was attending college, she was sure she wouldn’t be interested. For the art walk, she did more than display her sculptures — she opened her back yard to several other artists and offered free sculpting lessons for kids. 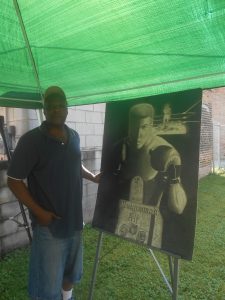 Artist Tommy Clark poses with a pencil drawing of Muhammad Ali, which, he said, he drew with a single piece of pencil. (Photo by Igor Studenkov/for Chronicle Media)

“The wonderful thing about Pullman is that people are approachable, they like to share their craft,” Smith said. “There was a huge arts community [in east Pilsen] in the early ’80s to late ’90s, and that’s what it feels like in Pilsen.”

Arthur Pearson, a writer and an artist who lived in Pullman for 23 years, wound up working with stained glass thanks to the house he moved into. He noticed that the transom — the structural beam about the door — was missing stained glass, and decided to fill it in himself.

Pearson argued that art has been there from the beginning, noting that George Pullman always wanted his railcars to look good.

“Pullman hired artists to create beautiful train cars,” he said. “And my sense is that the beauty in the community continues to attract lots of artists. A lot of us are doing the modern version of the kind of artistry, the kind of craftsmanship [Pullman factory] workers did 130 years ago.”

Other artists are directly influenced by Pullman’s history. Salime Cobb-Collins, who lives in Pullman and operates an art studio in Beverly, noted that while Pullman porters are well-known, their female counterparts — the Pullman maids — tend to get overlooked.

“Women are hidden in the history of Pullman, and we’re trying to find them,” Cobb-Collins said.

For the artists, the art walk was a great way to meet fellow artists and their neighbors. Alexis Willis, who paints on glass, is new to Pullman and South Side in general, so she was eager to take advantage of the opportunity.

“I hope to become one of the more popular faces in the arts and just be active in the community,” Willis added. 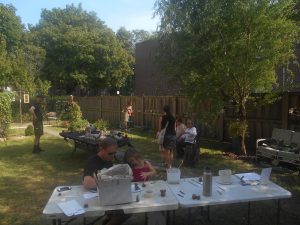 Other artists had more in mind. Tommy Clark, who lived in Pullman for the past 2 1/2 years, uses paint and pencil to depict his life’s struggles. He said that he hopes that his work would inspire others who may be facing struggles of their lives to find their own ways to express it.

“Everybody in life should express them in their art, show what they’re going through,” Clark said. “Those things need to be seen and recognized.”

And artists from the neighboring communities enjoyed the art walk as well.

Rolanda Hudson, of Riverdale, specializes in paintings that incorporate 3D textures. She said that, while she had good experiences at art fairs on the North Side, there was something special about participating in one in her part of town. 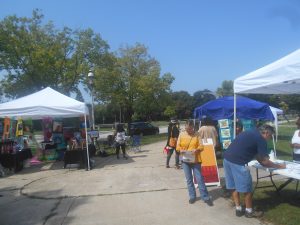 PullmanArts has high hopes for next year’s art walk — and beyond. Roewade said that they were looking to invite more artists and have performances at Arcade Park, and they want to see the entire Arcade Park filled with tents.

“We want to get to the point with [the art walk] where lots of artists from all over the south side can come and show their work,” she said. “We have an idea of making it an art fair as well as an art walk. We’d like to make it a major South Side cultural event, and we’re building in that direction.”