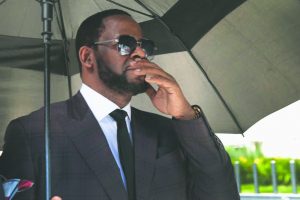 Traveling to scheduled appearances with an entourage is nothing new for singer R. Kelly.

However, his traveling companions will be quite a bit different than what he is used to on his next trips. U.S. Marshals will transport the recording artist from the Metropolitan Correctional Center in Chicago to the Eastern District of New York for an Aug. 2 arraignment on racketeering charges.

Federal Magistrate Judge Harry Leinenweber of the U.S. District Court of Northern Illinois ordered that Kelly, who remained in custody after his bid to be released on a recognizance bond July 16 failed, be taken to New York and then transferred back, again accompanied by U.S. Marshals, for a Sept. 4 status hearing on the child pornography charges pending against him in federal court in Chicago.

The Chicago-based artist, whose full name is Robert Sylvester Kelly, faces a 13-count indictment in Illinois, alleging he produced and received child pornography, and enticed five minors to engage in criminal sexual activity, making multiple videos of some of the victims.

The indictment also charges Kelly with conspiring to intimidate victims and conceal evidence in an effort to obstruct law enforcement, including an investigation in the 2000s that resulted in his trial in 2008 in Cook County on state child pornography charges.

A former employee of Kelly’s music business, Milton Brown, 53, of Nevada, formerly of Chicago, was in court July 19 to be arraigned on one count of conspiracy to receive child pornography.

Dressed in a gray pinstripe suit with a white pocket square in the breast pocket, Brown answered, “Yes, sir,” quietly when Magistrate Judge Young Kim asked him if he understood the charge brought against him.

Accompanying Brown before Kim was federal defender Mary Higgins Judge, who entered a “not guilty” plea to the charge on Brown’s behalf.

A conviction of conspiracy to receive child pornography carries a maximum prison sentence of 20 years.

An Aug. 22 status hearing will be held in Brown’s case

As a part of his bond agreement, Brown is not allowed to be in contact with any of the alleged victims in the case.

Prosecutors contend that Kelly made videos of him having sex with four of the five underage girls with whom he is accused of having sexual encounters.

Judge was able to get Brown time in Northern Illinois to meet with his legal team. The federal prosecutors had initially sought that Brown only be allowed back in the Northern District of Illinois to attend court hearings.

The government had also sought a secured bond. Brown was released on an unsecured $4,500 recognizance bond. A hearing regarding Brown’s bond was scheduled for July 23. Results of that hearing were not available as of press time.

“The government is looking into if he has property,” Judge told Kim.

The federal magistrate said he was fine with Brown being out on an unsecured bond “for the time being.”

Brown told the judge that he has already turned in his U.S. passport, a requirement after his arrest.

A separate federal indictment was unsealed July 12 in the Eastern District of New York charging Kelly with racketeering for allegedly operating a criminal enterprise that promoted Kelly’s music and recruited women and girls to engage in illegal sexual activity.

The charges allege that Kelly and McDavid in 2001 began paying an acquaintance hundreds of thousands of dollars to collect the videos for the purpose of concealing and covering up their existence.

Kelly and McDavid also agreed to pay one of the minors and another individual for their efforts to return the videos, but only after they took polygraph examinations to confirm they returned all copies in their possession, the charges allege.