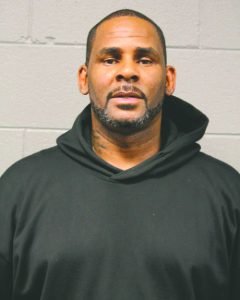 Kelly has been charged with 10 counts of aggravated criminal sexual abuse involving four alleged victims — three of whom were allegedly under the age of 17.

The singer, whose full name is Robert Kelly, 52, and lives in the 400 block of North Wabash Avenue in Chicago, was arrested Friday, Feb. 22 after a warrant was issued for his arrest.

His bond was set at $1 million at a bond hearing Saturday. He couldn’t post bond and the night in Cook County jail Saturday night after failing to post 10 percent of his bond.

Four of the counts stem from Kelly’s alleged involvement with one victim from May 26, 1988 and May 25, 1999, who Cook County State’s Attorney Kim Foxx only identified as H.W. and being under 17 years of age.

Kelly was taken into custody at the Chicago Police Department’s 1st District headquarters at 1718 S. State St. at 8:14 p.m. Friday after being indicted by a Cook County grand jury.

The second victim, identified as R.L. and also under 17 years of age, was involved in an incident, alleged to have occurred between Sept. 26, 1998 and Sept. 25, 2001, Foxx said. Two counts of aggravated criminal sexual abuse were filed based on R.L. being under 17 and Kelly being more than five years older than the victim, Kelly said.

The third alleged victim, identified as L.C., was involved in an incident with Kelly on Feb. 18, 2003. The grand jury returned one count of aggravated criminal sexual abuse based on the transmission of semen by Kelly upon the victim for the purpose of sexual gratification, Foxx said.

The fourth victim, identified as J.P., was involved in alleged incidents with Kelly between May 1, 2009 and Jan. 31, 2010. A grand jury returned an indictment of three counts of aggravated criminal sexual abuse based on the alleged victim being under 17 and Kelly being more than five years older the victim.

Aggravated criminal sexual abuse is a class 2 felony ranging from three to seven years in prison and also punishable by probation.