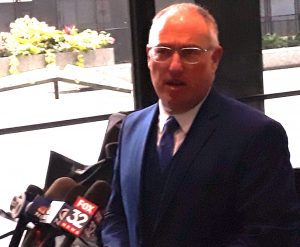 Steven Greenberg, attorney for R. Kelly, talks with the media following a status hearing Wednesday in the singer’s case. Greenberg said the singer is suffering from a toe infection and other unspecified conditions while in federal custody. “They’re nothing life-threatening, but things if he were free he would be able to see a doctor about.” (Photo by Kevin Beese/Chronicle Media)

Singer R. Kelly is battling a toe infection that has placed him in a walking boot, according to his lawyer.

The recording artist was scheduled to appear in court Wednesday for a status hearing in the federal case against him, but waived his right to be at the hearing, according to his attorney, Steven Greenberg.

“Mr. Kelly has an infection in his toe and they have taken the nail off to treat it,” Greenberg told U.S. District Magistrate Harry Leinenweber during Wednesday’s hearing. “He was concerned about someone stepping on his toe.”

Kelly faces federal child pornography charges in district court in Chicago. A 13-count indictment alleges that the singer, whose full name is Robert Sylvester Kelly, produced and received child pornography, and enticed five minors to engage in criminal sexual activity, making multiple videos of some of the victims.

The indictment also charges Kelly with conspiring to intimidate victims and conceal evidence in an effort to obstruct law enforcement, including an investigation in the 2000s that resulted in his trial in 2008 in Cook County on Illinois child pornography charges.

Greenberg said Kelly has other health issues as well, but did not elaborate.

“They’re nothing life-threatening, but things if he were free he would be able to see a doctor about,” Greenberg said. “Jail health care is substandard.”

Other charges, filed in a separate indictment in the Eastern District of New York, allege Kelly operated a criminal enterprise that promoted his music and recruited women and girls to engage in illegal sexual activity with him.

Kelly has been denied bond in both New York and Chicago.

Kelly is being held in the federal Metropolitan Correctional Center in Downtown Chicago.

Kelly’s bond hearing on the federal charges in the Chicago case has been pushed to Feb. 13. He is slated to go to court on those charges in April.

Greenberg said his team has filed a motion to dismiss the obstruction of justice charges against Kelly feeling that the statute of limitations should prevent the singer from facing those charges.

Plus, he added, the U.S. Attorney’s Office has not established sufficient legal grounds for the obstruction charges.

Kelly’s co-defendants in the case, Milton Brown and Derrel McDavid, have filed motions to dismiss the charges against them.

U.S. Attorneys will have until late December to submit written responses on all three defendants’ motions.

A former employee of Kelly’s music business, Brown, 53, of Nevada, formerly of Chicago, faces one count of conspiracy to receive child pornography.

McDavid, 58, of Chicago, also a former employee of Kelly’s music business, faces two counts of receiving child pornography and one count of conspiracy to obstruct justice.

Greenberg noted that the way federal rules are only of Kelly’s two live-in girlfriends can visit him at a time. Under federal guidelines, only one nonfamily member can be on an incarcerated individual’s visiting list every three months.

“For both women, it has been devastating to them and to him,” Greenberg said of the singer’s unique living situation.

He said federal jail guidelines should be modernized to reflect nontraditional living arrangements.

“Not everyone is married or has a traditional relationship,” Greenberg said.