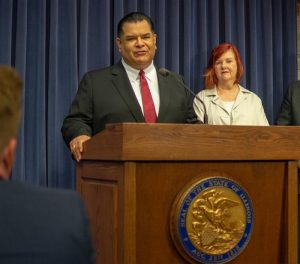 Former Democratic state Sen. Martin Sandoval, of Chicago, is joined by Republican state Rep. Margo McDermed, of Mokena, at a news conference May 15 in Springfield advocating for greater infrastructure spending on roads and bridges. Sandoval was named Monday along with others in a a racketeering lawsuit that seeks to void tens of thousands of traffic citations issued through red light cameras at intersections in Chicago-area suburbs. (Capitol News Illinois photo by Jerry Nowicki)

SPRINGFIELD — Former state Sen. Martin Sandoval and SafeSpeed LLC, the red light camera company at the center of federal corruption charges against him, are now the targets of a racketeering lawsuit that seeks to void tens of thousands of traffic citations issued through the company’s devices.

Lawrence Gress, a Downers Grove resident and lead plaintiff in the case, filed the suit Monday under the federal Racketeering, Influenced and Corrupt Organizations Act (RICO), a law most often used to prosecute organized crime syndicates. But RICO also allows for private civil suits for actions that are part of a criminal enterprise.

The lawsuit alleges SafeSpeed, its officers and employees, paid bribes to Sandoval and several other local government officials to gain approval for placing its red light cameras at various intersections in Chicago-area suburbs.

Sandoval and the other government officials, the lawsuit alleges, were paid as “undisclosed sales agents” or “consultants” based on a percentage of the revenue generated by the cameras.

Sandoval served in the state Senate from 2003 until Jan. 1, when he resigned amid the corruption scandal. Starting in January 2009, he was chairman of the powerful Senate Transportation Committee and was instrumental in securing passage of last year’s $45 billion capital improvements program known as Rebuild Illinois.

He was removed from his chairmanship in October, just weeks after federal agents executed a search warrant on his Statehouse office in Springfield where they seized a number of computers, cellphones and boxes of documents.

On Jan. 28, Sandoval pleaded guilty to one count each of federal bribery and tax fraud charges as part of a deal with prosecutors in which he agreed to cooperate with their ongoing investigations.

The RICO lawsuit, however, is separate from the criminal case, but it is based largely on the same set of facts to which Sandoval has already pleaded guilty.

It alleges that beginning sometime in 2016 and continuing through October 2019, SafeSpeed operated a corrupt enterprise, known as an “association-in-fact,” by conspiring with the other defendants to pay bribes or kickbacks to public officials who would steer contracts toward the company for operating red light cameras.

Sandoval is accused of using his position in the Senate to serve as the company’s “protector” by ensuring legislation unfavorable to the company, including bills to ban the use of red light cameras, would never pass and to help override objections from the Illinois Department of Transportation about the placement of certain cameras.

In exchange, the lawsuit alleges, SafeSpeed and its employees arranged to pay $20,000 a year in donations to Sandoval’s campaigns.

The lawsuit was filed as a proposed class action on behalf of an estimated 100,000 or more individuals who were fined between $100 and $200 for each ticket issued by a red light camera that was “corruptly and improperly installed, over repeated objections from IDOT, as a direct and proximate result of bribes paid.”

While the claim of each individual member of the class is relatively small, the lawsuit argues, combined they add up to millions of dollars.

It is the second RICO case that Gress, the lead plaintiff, has filed that involves Sandoval. Another pending case was originally filed in 2017 after Gress was passed over for a job as community relations representative for the Pace Suburban Bus Company in favor of Sandoval’s son, Martin Sandoval II.

That suit refers to Sandoval as “the kingpin at the center of the wide-ranging and longstanding conspiracy” alleged in the case.