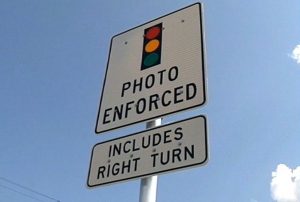 Little Lakemoor, a village of just over 6,000 residents straddling the border of two counties in the far northwest Chicago suburbs, generates substantial revenue from red-light cameras.

In 2015, the village brought in $1.4 million from three cameras at one busy intersection, according to its president. That was down from the previous year’s $1.8 million.

The money has been a shot in the arm for the village, allowing it to build a new municipal center, said Lakemoor Village President Ryan “Todd” Weihofen.

“But it’s going to keep dropping because the idea is to change people’s behavior,” Weihofen said. “We want a situation where we do not make any money at all.”

Red-light cameras are back in the spotlight recently after a federal judge handed down a 10-year sentence in late August to John Bills, the Chicago city official found guilty of bribery, extortion and fraud for helping to steer millions of dollars in contracts to Arizona company Redflex Traffic Systems.

“This is a program that has been rife with corruption, and instead of trying to fix a broken, corrupt system, it should be simply eliminated,” Rep. David McSweeney (R-Barrington Hills) said.

McSweeney, with others, sponsored a bill in the state House to ban red-light cameras in non-home rule communities, including Lakemoor. HB 141 passed the House by a large majority, but has not yet been considered by the Senate.

Motorists know well the intersection of Routes 120 and 12. Tens of thousands have been assessed a $100 fine after being caught on its cameras, most of them for failing to come to a complete stop before turning right.

The revenue generated by Lakemoor, on the border of McHenry and Lake counties, is, of course, miniscule compared with what the city of Chicago has assessed to motorists since its first camera was installed in late 2003.

At its height, Chicago had 384 cameras installed at intersections. That figure has been reduced by 100 cameras. In total, Chicago’s red-light camera system has generated more than $600 million in revenue.

The legislation proposed is a first step, McSweeney said.

However, it would not affect those cities and suburbs with home-rule powers, including Chicago, Des Plaines, Skokie, and Rosemont.

Instead, the ban would apply to suburbs such as Westchester, Forest Park, Libertyville, and villages like Lakemoor. McSweeney said the legislation does not cover home-rule cities and communities because that type of ban would need the support of three-fifths of both chambers.

“My view is if the state legislature is so serious, why not take out all cameras,” Weihofen said.

It’s all about politics, and legislators are afraid to take on Cook County, Weihofen said. He added, “If it passes, it will make it harder on our patrolmen, because [the convergence of Routes 12 and 120] is a very dangerous intersection, and there is no place for them to enforce the laws, [and] pull people over.”

Chicago Department of Transportation statistics reveal that between 2005 and 2013 crashes of all types were down at intersections with cameras, and overall safety had improved.

The Texas A&M Transportation Institute, in one of the most comprehensive studies of the effectiveness of cameras, cited research that showed right-angle crashes were reduced by approximately 25 percent overall.

Rear-end crashes increased in all seven jurisdictions studied, from between 7 and 38 percent. The average increase was about 15 percent.

These indicated that red-light-related crashes decreased by about 17 percent. But rear-end crashes increased by 56 percent, and total crashes were virtually unchanged.

Russ Rader, a spokesman for the Insurance Institute for Highway Safety, said research has found that red-light cameras are an effective way to reduce red-light running, crashes, and injuries.

“Our position is based on the research that we and others have done that has found that red-light cameras are an effective way for not only reducing red light running but also reducing crashes, injuries and deaths,” Rader said.

Rader said, “Some studies have found rear-end crashes increase but that is not a consistent finding. Another key point is that rear end crashes tend to be low severity events. It is the high-speed, right-angle crashes that injure and kill people.”

McSweeney is not certain of the motivation, but was clear on why they were introduced and why he believes red-light cameras need to go.

“These cameras are used to produce additional revenue for local governments, not for safety,” McSweeney said. “I want to ban red light cameras throughout the state.”

— Red-light cameras limit some crashes, cause others — but all collect revenue    —