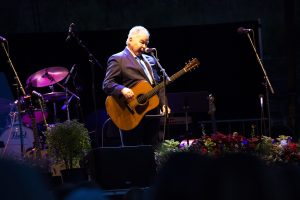 John Prine performs during the “An Evening at the Arch” concert at Yellowstone National Park in 2016. (Photo by Matt Ludin/National Park Service)

John Prine’s remarkable life reminds us that greatness has little to do with where or into what circumstances you are born.

Prine, who died April 7 from the coronavirus at age 73, grew up just four miles from my house, he in the west Chicago suburb of Maywood, me in Oak Park, bordering Chicago’s West Side.

As anyone who grew up in the near western suburbs knows, Oak Park has long gotten the headlines, while Maywood was lucky to be in the footnotes.

Back when Prine was growing up, Maywood was a nearly all-white, lower middle-to-middle class suburb, with a strong manufacturing and commercial base that provided the bulk to the employment to area residents. A village of unpretentious working-class grit, with empty lots and junkyards where Prine would observe that broken bottles “look just like a diamond ring.”

My high school, Oak Park-River Forest (OPRF) was ranked in the top five high schools in the entire United States in the 1960s, with a 90-plus percent college attendance rate. Prine’s Proviso East high school was, well, where all those working-class kids in Proviso township went.

Most kids in Maywood, if they wanted a car when they turned 16, started looking for a part-time job. More than a few of my classmates at OPRF got a car as a 16th birthday gift.

Maywood and Proviso East were seen by many in Oak Park and neighboring River Forest as being “on the wrong side of the tracks,” so to speak. That started just west of the county forest preserves, at 1st Avenue, the street on which Prine grew up, a block away from the high school.

While Prine had few of the advantages Hemingway enjoyed growing up, he was every bit Hemingway’s peer. Critics praised Hemingway for his narrative economy and how he could express in eight or 10 words what took a lesser writer 30 words. Prine too could say a great deal with few words, his lyrics cutting straight through to the heart of the topic.

Early on Prine had the courage to look at the painful realities less fortunate people experience, of the unfairness and heartbreak and brokenness in this world, and had the honesty to write about what he saw without sanding down the rough edges.

As a boy delivering papers to a retirement home, he saw the loneliness in the eyes of an elderly resident. He’d give voice to the experience years later in “Hello in There.”

Prine realized there were the haves and the have nots in this world, those who did things to others, and those who had those things done to them. He saw the human toll of the inherent pecking order of this world that so often restricted personal choices and ultimately foreclosed on people’s dreams.

His lyrics could strip the multiple layers of societal varnish off the wood of a subject and show us the raw reality beneath it — a physically and emotionally ravaged war veteran, an unappreciated wife watching life pass her by, an elderly person trapped in a frail body yearning to be seen and have their humanity acknowledged, lost souls staring despairingly out at the world through a dirty window.

Hemingway crafted interesting, entertaining stories masterfully written, but he generally lacked any empathy or concern for the humanity of others. He celebrated masculinity and dominance, romance and faraway places populated with privileged, monied people absorbed with their wants and needs.

Prine sang of people who experienced too few of life’s triumphs and too much of its misfortune. Scarred psyches and hearts too bruised and weary to do much more than endure their circumstances, unable to give voice to their pain.

So Prine spoke for them, and about them to us. He couldn’t do much about any of what he saw, but he could point out the injustices and their toll on people, with a simple eloquence.

Hemingway, the son of privilege who became a literary lion and world traveler and adventurer, never saw fit to come back to his Oak Park roots.

Prine, no matter how far he travelled or how high he soared, never really left his roots, returning to Chicago and Maywood regularly.

Prine first visited Val’s in the ’70s, and like many other Chicago musicians  through the years, Prine continued to drop in both to look at records and to talk with her about music.

My old colleague from the Wednesday Journal newspaper, Doug Deuchler, wrote about Prine’s visit in the paper. Prine, he said, had contacted Val’s business partner, Shayne Blakely “a while ago ‘out of the blue’ and offered to appear at the record store, talk to folks’ interview-style, and then sign books and his new album.”

Deuchler recalled Prine “was quite funny and told many off-the-cuff stories about growing up in Maywood and his early days performing on the North Side.” A world class talent and musical legend praised by the likes of Bob Dylan, Kris Kristofferson and Robert Plant, just being himself, being the unpretentious working class guy he’s always been.

Now, in these sad circumstances, it’s Maywood in the headlines as its native son is praised far and wide for his talent and humanity.

A native son who, like the lyrics of one of his most memorable songs, left us with more than just “one thing that (we) can hold on to.”