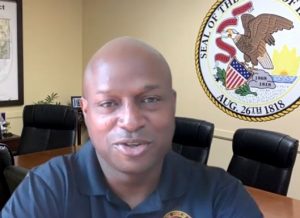 Rep. Emanuel “Chris” Welch (D-Hillside) discusses a bill he is promoting to increase the proportion of state purchasing and contracting with minority- and women-owned businesses during a video news conference Thursday, Aug. 27. (Zoom.us photo)

SPRINGFIELD — State Rep. Emanuel “Chris” Welch said Thursday, Aug. 27 that he will demand passage of legislation in the upcoming fall veto session to give minority- and women-owned businesses a larger share of the estimated $20 billion in state purchasing and contracting dollars allotted annually.

“I am demanding that veto session takes place as scheduled, because the Black agenda cannot wait,” Welch, a Hillside Democrat, said during a video news conference. “The Black agenda, which will be rolled out in the coming days, is going to demand equity and inclusion and in several areas.”

Welch was referring to a package of legislation expected to be put forward by the Illinois Legislative Black Caucus. Ahead of that announcement, however, the Maywood Democrat said he will push for passage of House Bill 5824. It would improve contracting opportunities for minority- and women-owned and operated businesses, he said.

“This isn’t something new. It’s something that we’ve been consistently fighting for year after year after year,” Welch said. “And I think in this watershed moment that we are (at) in history, this is the time, now more than ever, that we should be given fair contracting opportunities.”

Among other things, the bill would give the Department of Commerce and Economic Opportunity the job of holding “matchmaking” workshops between minority- and women-owned vendors and large purchasing institutions that are already required to file supplier diversity reports. Those include higher education institutions, hospitals, casinos and racetracks, and insurance companies that manage the state’s Medicaid program. Currently, that responsibility rests with the Department of Central Management Services.

Welch said the bill also would clarify a current law that requires all businesses receiving EDGE tax credits to file supplier diversity reports during the year in which they seek a tax credit, and it would require them to participate in matchmaking workshops. EDGE stands for Economic Development for a Growing Economy.

Further, the legislation would require all insurance companies with assets exceeding $50 million that are licensed to do business in Illinois to file supplier diversity reports and participate in the matchmaking workshops.

Illinois currently has a program, known as the Business Enterprise Program, aimed at helping minority- and women-owned businesses gain access to the state’s purchasing and contracting process. It also maintains a list of registered businesses that are at least 51-percent owned by minorities, women and people with disabilities.

Illinois currently has a statute that sets a goal of awarding at least 20 percent of the total dollars of state contracts to businesses owned by minorities, women and people with disabilities, but Welch said many of the state’s largest purchasing institutions, including its higher education system and Medicaid program, have consistently failed to meet that target.

“I have spent the summer looking at data in all of these industries. And the data is abysmal, particularly in the managed care organization industry,” he said.

Although the bill would not mandate new hiring or contracting quotas, Welch said he believes the increased reporting requirements would “help shine a light on those disparities and the lack of opportunities being provided.”

Welch was joined in the news conference by officials from the Federation of Women Contractors, the Chicago Minority Supplier Development Council and the Hispanic American Construction Industry Association, all of whom expressed their support for the bill.

The bill was introduced Monday, Aug. 24, and has not yet been assigned to a committee.