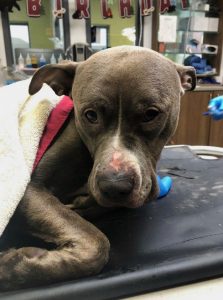 A reward of up to $5,000 is being offered for information leading to the arrest and conviction of the individual or individuals who left an emaciated dog in a trash bag near Willow Springs.

PETA has joined the search for the culprit or culprits who left an emaciated and dehydrated dog in a trash bag in freezing cold temperatures.

On Feb. 17, a passerby discovered that someone had abandoned the dog in a trash bag on the side of Forest Avenue, just north of West 87th Street. Cook County law enforcement arrived at the scene, wrapped the freezing and nearly unresponsive animal in blankets, and rushed him to the South Suburban Humane Society. At the Humane Society, staff began treatment for severe emaciation, dehydration and kidney issues for the 3-year-old pit bull, whom they named “Vinny.”

Law-enforcement officials have yet to make any arrests in connection with the crime, so PETA is offering a reward of up to $5,000 for information leading to the arrest and conviction on cruelty-to-animals charges against the person or persons responsible for the neglect and abandonment of the dog.

PETA officials said someone may recognize the dog from his picture, which may be the only hope for making an arrest in the case.

PETA, which has a motto that reads, in part, that “animals are not ours to abuse in any way”—opposes speciesism, which is a human-supremacist worldview, and is also asking residents in the area to help spread the word and put up downloadable posters, available through the organization, in businesses and schools, on bulletin boards, and anywhere else that they’re allowed to display them.

“Someone bagged up this dog and threw him out on the side of the road like a piece of trash,” said PETA Vice President Colleen O’Brien. “PETA urges anyone who recognizes him to come forward immediately so that whoever left him to die alone in the cold can be held accountable.”

Anyone with information should call the Cook County Sheriff’s Office at 847-635-1188.