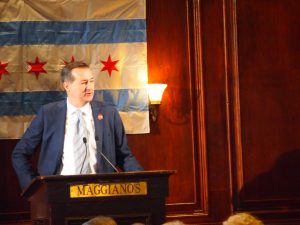 Chicago Cubs’ president Tom Ricketts said his family continues to do what they can to make Wrigley Field a good neighbor. “I think we have done what we said we were going to do,” Ricketts said last week during a talk at the City Club of Chicago. (Kevin Beese/Chronicle Media)

“I like to view it a lot like the (Roman) Coliseum. I want people to walk through 2,000 years from now and ask “What things were they doing here?’” Ricketts said.

The Cubs’ president said he would love to go back in time and talk with Charlie Weeghman, who build Wrigley Field in 1914.

“I would tell him that $750 million was just put into his $250,000 stadium,” Ricketts said at a City Club of Chicago breakfast last week.

He said one more year of renovations will focus on the upper deck, improving concessions and rest rooms and making the second tier more appealing for people visiting the ballpark.

Ricketts said the Cubs have tried to be a good neighbor with the residents and businesses surrounding Wrigley.

“I think we have done what we said we were going to do,” Ricketts said.

He said the organization continues to look at ways to address residents’ issues with home night games.

“We have listened to the people around Wrigley Field, their concerns and things they’re worried about,” the Cubs’ president said. “One of them is always crime.”

He said the Cubs have pledged $1 million toward more security cameras in the area to prevent crimes and help police solve cases more efficiently.

“We work with our local police commander to make sure that our neighborhood is safe not just on game days where we have a large presence and non-game day events where we have a small presence, but all the time,” Ricketts said.

The $1 million for cameras is on top of $500,000 the Cubs have pledged for new crime-fighting programs in the area.

Ricketts said he is also happy the Cubs are part of five professional sports teams in the city banding together to address violence. The Chicago Sports Alliance, created by Chicago Bulls and White Sox chairman Jerry Reinsdorf, is providing one-time grants to organizations working to stem violence in the city. Grants for this year have gone to Choose 2 Change, a mentoring and trauma program in Chicago’s Englewood neighborhood; the University of Chicago Crime Lab; and the Chicago Police Department’s Strategic Decision Support Centers.

Ricketts said he does not believe anyone in the community would say that Wrigley Field is not a better place now than before the $775 million in improvements.

“We’ve gotten really good reviews from almost all of our neighbors,” Ricketts said. “Everything we’ve done has been created for making the neighborhood better. We have executed. We said what we were going to do and we did it. Hopefully people trust us by now.”

He said that Wrigley Field is “everyone’s happy place” and his family wants to continue to improve fans’ experience there.

— Ricketts: Wrigley a better place to be now —-