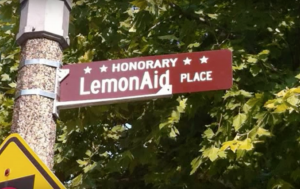 Traffic gets a little clogged in River Forest every Sept. 11, but residents don’t seem to mind: Visitors are just the Lemon Aid customers. Every year on the anniversary of the 9/11 attacks, the kids of the 700 block of Bonnie Brae Avenue raise money for a children’s charity — one paper cup at a time.

Over 15 years, the event has become a back-to-school block party.

Hand-painted signs and sidewalk-chalk messages decorate the street where children in bright yellow shirts serve beverages, popcorn and baked goods to throngs of thirsty customers. For the past several years, there’s even been a drive-through donation lane on Chicago Avenue at Bonnie Brae (one block west of Harlem Avenue). The village uses the event as a community gathering to help distribute information about West Nile Virus and other community concerns. Children’s events this year are sponsored by Formula Fitness Club and Chicago Parent Magazine.

The yearly LemonAid sale has raised more than $180,000 for charities, according to the group’s website. This year, donations will be shared by the Oak Park Food Pantry and Providing Instruments to the Next Generation (PING!). 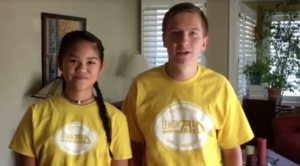 Kate Best and Nick Henek are the chairs of the 2016 LemonAid event. (Photo courtesy of LemonAid website)

“We use cups to guestimate how many people have come through,” said organizer Patty Henek. “We’ve gone through as many as 3,000 cups. But now that we have a drive-through lane at Chicago Avenue, we get even more people [who donate].”

The block party also consumes 70 gallons of lemonade, donated by Whole Foods, and coordinates 500 dozen volunteer baked items to offer during the sale. There are no set prices, “people give what they want,” Henek said.

Festivities kick off at 3 p.m. with performances by the Oak Park and River Forest High School Marching Band and Chorus, followed by remarks from River Forest Mayor Cathy Adduci. This year Kiwanis will be offering cotton candy and Burger Moovement (formerly Burger Boss) will provide free mini-cheeseburgers (while supplies last).

LemonAid means a lot to Oak Park resident and New Jersey native Cathy Morgan, whose father Richard J. “Dick” Morgan died in the collapse of the North Tower. According to news reports, Morgan managed safety concerns as vice president of emergency management and worked for more than 40 years for the company. He was affectionately called the “Mayor of Con Ed.” Cathy Morgan’s reminiscence of 9/11 on the 15th anniversary will be read.

“Cathy has given us a special flag [like the one] her mother hangs in New Jersey for 24 days every year — the time it took to find her father’s remains.”

In 2002, on the first anniversary of the attacks, parents on the block wanted to find a way to help children make sense of the “remember a tragic event with a positive one.”

“It was a collective ‘what can we do coming up to year anniversary? We can’t let this day go by like any other day. We need to do something to mark the day,’” Henek said.

New York friends advised the group to “keep it local, keep it in the community, and let the children help a charity that serves children in some way,” Henek said.

That first year, the sale raised $400 for Hephzibah Children’s Association.

“When the children toured the Hephzibah group home, for some of us, the light bulb went off and we said we need to do this again.” The next year, sales more than doubled for a $900 gift to the food pantry. 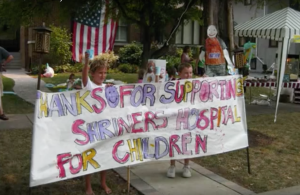 To remember 9/11 children in the 700 block of Bonnie Brae in River Forest raise money for charity with a lemonade sale/block party. (Photo courtesy of LemonAid website)

Parents step back and let children and teens organize and vote to choose the charity each year. A representative from the charity comes to tell the organizers how funds will be spent. Thanks to online donations and other fundraising, in 2015, the sale raised $37,000 for two charities. This year’s goal is $40,000, Henek said.

Many of the original children on the block have flown from the nest, to college and beyond, leaving a new generation of kids on the block to carry on the tradition.

“It’s evolved seamlessly, as new families have moved to the block they jump right in and get involved,” Hanek said. Children on the block look forward to the party “like Halloween and Christmas,” she added. “The kids know what to do, they’re out there setting up, ready to do their part.”

“My favorite part of this was seeing how if you put together an event for a good cause, people will just come up and help you without being asked,” she said. “LemonAid really opened my eyes to volunteer opportunities I’d like to get involved with.”

Skills she learned contacting local businesses for donations helped her when she was looking for a summer job.

“I learned how to advocate for myself and talk to business owners ina respectful manner,” Hannah said.

“Many of the kids have grown up being a part of LemonAid,” Hanek said. “As a parent, it’s been amazing watching them grow and their awareness of programs we’re supporting. Just seeing them at the presentations, asking thoughtful questions about how the organizations might use the money, that’s kind of been the best part.”