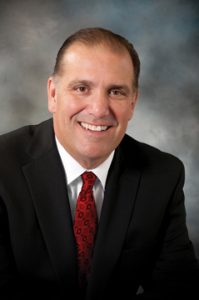 Rosemont Mayor Bradley A. Stephens will get a 53 percent pay raise next May, bringing his annual compensation to $260,000 a year. Village Board members voted for raises for Stephens, age 53, and the village clerk at their Aug. 10 meeting, effective after the April, 2017 election. Stephens’s current salary is $170,000, including a $25,000 yearly stipend for serving as liquor commissioner.

A village spokesperson said the pay raise reflects that Stephens’s role is more than a typical part-time village mayor.

“[Stephens] wears many hats in the village. He does the work of a village administrator and travels around the country as economic development director,” said Andrew Mack of Mack Communications. “Instead of hiring five or six more employees, he does that himself.”

Chicago Mayor Rahm Emanuel, also a hands-on full-timer, earns around $216,000 per year, according to the City of Chicago website.

Rosemont, the 1.79-square-mile town with a population of 4,200, sits right next door to O’Hare airport. The town has boomed since Stephens’ father Donald A. Stephens Sr. came into power in the 1950s. The senior Stephens built the town into an economic powerhouse and his son and other members of the Stephens family have carried on the economic boom with 15 hotels with a capacity of 5,700 rooms, a convention center, stadium, theater, outlet malls, restaurants and office space. The village just paid $800,000 to erect a fountain and statue of the family patriarch.

“In Rosemont’s instance, it’s a different kind of municipality altogether,” Mack said. “It’s run very much like a business with a multimillion dollar economy in a small area there.”

Rosemont has a village budget of $53.8 million and expects to earn $14.8 million in 2016 sales tax receipts, according to the village website. The village shares the wealth by issuing tax rebates every year of about $4,200 per household, Mack said.

At the August meeting, village trustees also voted a $10,000 pay raise from $65,640 to $75,640 to Clerk Debbie Drehobl, who also works as the mayor’s full-time secretary. Board members kept their salaries flat at $30,000 a year. Their duties include attending up to 12 board meetings a year and being present at village functions.

The village employs around 800 people, Mack said, the majority of whom live in the village’s walled off residential area. Among those employed are other members of the Stephens family, including Brad Stephens’ two nephews, Christopher Stephens who earns $250,000 a year as chief of the Donald E. Stephens Convention Center and Public Safety Department Chief Donald Stephens III, who’s paid $180,000 a year. Stephens’s brother Mark Stephens’ cleaning business receives around $4 million a year. The Chicago Tribune identified 10 Stephens family members who have been on the village payroll.

Contractors donate generously to the political committees of the Stephens family, which controls more than $520,000 in several political campaign funds, according to the Illinois Board of Elections website. Brad Stephens also serves as Township Committeeman for the Leyden Township Regular Republican Organization, which has supported suburban Cook County GOP candidates.

Stephens is expected to win the April election easily. He ran unopposed in the 2013 election and easily beat a challenger in 2009.

“The taxpayers continue to reelect the mayor because the village is so successfully managed and people understand that,” Mack said. “[Stephens] works tirelessly for the village. That’s his entire life.”