A sell-out and capped turnout of 2,000 participants made the 40th Lincolnwood Turkey Trot a photo finish Sunday to launch Thanksgiving week. 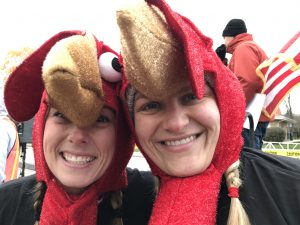 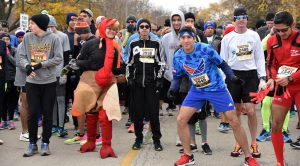 Melissa Rimdzius (left) of the Village of Lincolnwood, in a turkey costume, is a good sport at the start line. (Photo by Karie Angell Luc/for Chronicle Media)

Disco-Inferno-inspired garb was hip, honoring 1976, the year the event began.

Headbands with plush turkeys, given out to the first 1,500 participants, also added fall color. For the 40th anniversary, pumpkin pie and cider were served as treats. 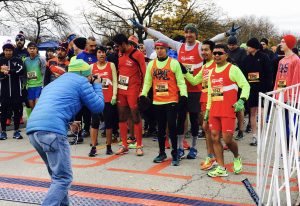 Runners get ready for the state of the race. (Photo by Karie Angell Luc/for Chronicle Media)

“It’s really exciting,” said Linda Vering of Northbrook, community outreach and marketing coordinator with the Lincolnwood Parks and Recreation Department. “People come back for Thanksgiving, they run this race with their family, we see whole families, we see corporate groups.

“Thanks for supporting us and making this another sell-out year,” Vering said.

And they’re off: The start of the Lincolnwood Turkey Trot 2016. (Photo by Karie Angell Luc/for Chronicle Media)

And while folks saw their breath in 26-degree partly sunny conditions, they didn’t let the chill get to their wishbones.

“Running in the cold weather makes you feel strong,” said one 10K runner from Indiana.

To recognize 1976 and the bicentennial year, disc jockey music from the 1970s was played back to motivate participants as they crossed the finish line.

“This year we’re shaking things up a little bit.”

Melissa Rimdzius (left) of the Village of Lincolnwood, in a turkey costume, is a good sport at the start line. (Photo by Karie Angell Luc/for Chronicle Media)

Non-perishable food items were collected on race day as part of a post-race drawing for a chance to win prizes.

This year’s medals tastefully honored the 40th anniversary and were given to top division winners in age divisions with gender specific awards for overall and top finishers in each race. 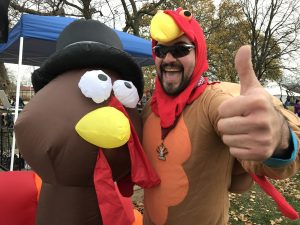 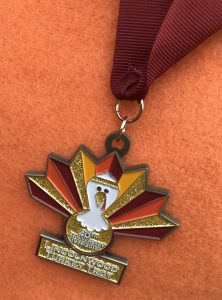