Handbells ring, are you listening?

What are the names of those neighbors you see ringing bells next to Salvation Army red kettles at a store entrance near you?

“This is a very important season,” said Michael Sjogren, captain and corps officer/pastor of The Salvation Army Norridge Citadel in Norridge.

“Bell ringers help us out throughout six weeks of our bell ringing season to help raise funds for this local Salvation Army unit,” he said. 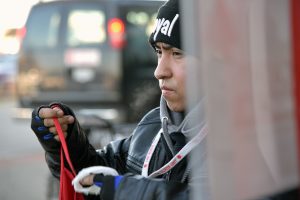 Kettle bell ringer Angel Wolf of Melrose Park is on location and about to begin his late afternoon shift. (Photo by Karie Angell Luc/for Chronicle Media)

A friendly hand-wave is festive too.

“We have some wonderful people and we appreciate all that they give us,” said Sjogren, among drivers who help to transport local bell ringers to work site shifts.

On Dec. 10 when it was 23 degrees, not including any Windy City wind chill, “This is the first real cold day that we’ve had this season,” Sjogren said that Tuesday afternoon. Yesterday, we had 24 bell ringers out, and today, maybe we’ll have about a dozen.”

Approximately 100 volunteers help round out the Norridge location’s bell-ringing season, which began on Nov. 8, ending on Christmas Eve.

“It’s a little rough just standing there and freezing, but it’s for a good cause,” said paid bell ringer Robert Easter of Harwood Heights who stood outside of a grocery store for his late afternoon shift.

“I think it’s worth the effort.”

The goal of this local bell-ringing season is to raise more than $130,000 to benefit community outreach needs offered by The Salvation Army Norridge Citadel.

“This is one way in which to do it,” Sjogren said.

For some bell ringers, the work season is a way to earn needed income or extra holiday cash.

They report to the Norridge Salvation Army location to board vans servicing four routes. 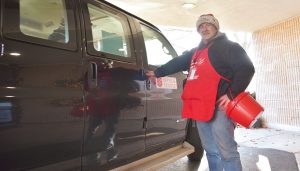 In his Chicago Blackhawks Santa hat, red kettle bell ringer Paul Kruse of River Grove is about to enter this van to be transported to his late afternoon shift at the Niles Walmart. (Photo by Karie Angell Luc/for Chronicle Media)

“There’s, like, not jobs out there that are valuable,” said Paul Kruse of River Grove who took a Tuesday late afternoon into evening shift at Walmart in Niles.

“And there’s still, even on top of that, there’s like a lot of discrimination. People won’t give people with backgrounds … jobs,” added Kruse, who wore a Chicago Blackhawks Santa hat for his shift. “I’ve been down and out, I know what it’s like to be hungry. I want to help other people who need food and shelter.”

Angel Wolf of Melrose Park worried about not having proper gloves for a colder weather shift.

“The Salvation Army had helped me, like, all my life,” said Wolf of why he took the seasonal job now and a couple of years ago. “You know, growing up, my parents would always come out here when we had struggles and stuff. “I mean, at that time, I felt it was just like my way of giving back.”

Upbeat banter was overheard by bell ringers, who swapped stories while riding in the warm van as Sjogren drove to four stops.

“We become kind of a family,” Sjogren said.

For Byron Hurlburt of Oak Park, a paid bell ringer, “I do it because I find it rewarding. It’s an important thing to do for the community. It’s a good way to make a little extra dough too.” 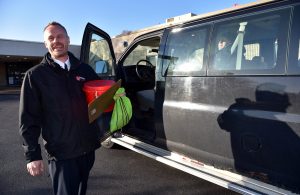 Michael Sjogren, captain, corps officer/pastor of the Salvation Army Norridge Citadel, is about to drive this van to transport bell ringers to shifts. (Photo by Karie Angell Luc/for Chronicle Media)

Jeff Banis of Park Ridge, also a paid bell ringer, said he was in a rollover car accident a few years ago.

“I was in a coma for seven weeks,” Banis said, telling his story while riding back to The Salvation Army Norridge Citadel after his paid bell ringing shift. “They gave me last rites three times.

“And now I’m just trying to do something now, where, even if it’s a small thing, to try to give back a little bit.”

As of Dec. 10, no gold coins had been found at The Salvation Army Norridge Citadel’s 25 bell ringing sites.

A mobile pay option at the red kettles is new this year, allowing donors to tap or bump pay using their phones.

“We have had a number of people who have donated that way this season,” Sjogren said. 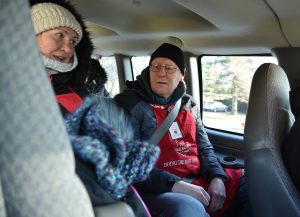 For any donations, be it coins, paper bills, online or digital, “We want to let people know how much we appreciate the support of the community,” Sjogren said. “We want to be here to help meet needs, gap needs.

“You know it’s Christmas and the holiday giving season when you hear those bells.”