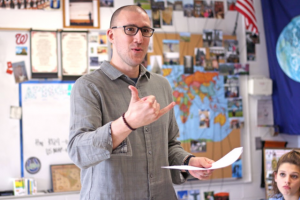 Three men who grew up not too far from each other, in Township HS District 214, have been instrumental in developing a Religious Studies supplement included in national curriculum guidelines released by the National Council of Social Studies.

Brady was a key player in developing the Illinois Global Scholars Certificate program signed into law by Gov. Bruce Rauner in late 2016. Brady also collaborated on religious literacy efforts, which blossomed into the companion document, or supplement, to the C3 Framework.

NCSS, which includes educators from McHenry County, is a U.S.-based association of social studies educators. NCSS defines social studies as “the integrated study of the social sciences and humanities to promote civic competence,” according to its website.

Brady, Camardella, and Marcus began collaboration about a year ago, developing coursework with colleagues as part of a professional learning group for teachers that teach World Religion or Comparative Religions. While developing the classes, the three Social Studies teachers began to realize the importance of including a specific World Religions section in the C3 Framework.

“One of the things I noticed when on the task force for the Illinois standards, [was] ‘religion’ appears five times across six disciplines,” Brady said. “Three of those are in glossary.  The other two are in appendices.” 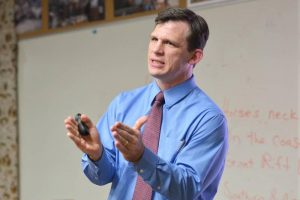 The three colleagues contacted the NCSS and began to pull together input from different scholars. They partnered with a coalition of faith leaders who were already formulating a joint statement for the inclusion of religion in the state social studies guidelines. The nine-member working team has ties to American Academy of Religion, and Religious Freedom Center, two professional associations of Religious Studies scholars.

“We took the baton the last leg,” said Brady.

The C3 Framework provides teaching tools in the areas of civics, economics, geography, and history. The working group hopes the materials will help teachers discuss religious beliefs within the context of the separation of church and state in the U.S. Constitution.

“Knowledge about religion is not only a characteristic of an educated person, but necessary for effective and engaged citizenship in a diverse nation and world,” says a statement about the religious studies supplement from NCSS.

“NCSS has really strong statements in the past about the importance of teaching about religions and in non-devotional, constitutionally appropriate way,” Brady said. “The potential issue is that religion is a part of culture and a part of human history.  Leaving [religious beliefs] out could send a message to some teachers and states that it’s unimportant or shouldn’t be emphasized.”

The new curriculum materials give social studies teachers specific guidance about how to teach about religion in public schools. For example, the materials help teachers explain how religions can be embedded in cultures and how religions are internally diverse and changing. 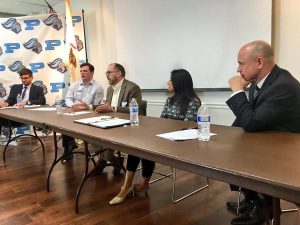 “Millions of parents from diverse religious backgrounds entrust the education of their children to the teachers in our nation’s public schools,” said Charles Haynes, director of the Religious Freedom Center in Washington, in a statement. “Teachers need to be fully informed about the constitutional and educational principles for understanding the role of religion in public education.”

Local Educators can get more information about the C3 supplement and about “teacher impact grants” at the Cultural and Religious Literacy Symposium and Bus Tour.  The Symposium takes Place July 17- 18 at Naperville Central and Prospect High Schools. To find out more or to register, visit:  http://www.Religiousliteracyed.org.

— Teaching about religion in a ‘Constitutionally appropriate’ way  —