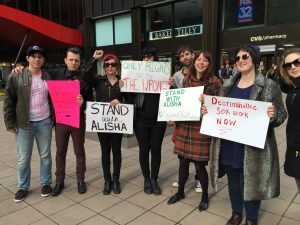 Sex workers returned April 29 to protest in downtown Chicago, this time in front of the North Michigan Avenue building that houses the French Consulate.

The group of around 12 women and men carrying signs said French laws, passed in April, were undermining the safety and economic security of French sex-worker’s union by fining “johns.”

“Sex work has been decriminalized in France,” said Spokeswoman Erica Friscioni. But she said punishing people who pay goods or money for sexual services was in fact criminalizing sex workers and “hindering their ability to support themselves.”

“If we were able to unionize and not be criminalized, we wouldn’t have to live in the shadows, and we could use our real names and not be ashamed and stigmatized in front of our families,” Friscioni said.

“I know culture plays a role and U.S. society in particular is kind of prudish,” she said. But she insisted that a sex-worker union would improve protection from “bad situations that happen.”

The group referred to the case of prostitute Alisha Walker, who was convicted of second-degree murder in the Orland Park stabbing death of a high school teacher during a dispute over money and safe sex, prosecutors said.

They asserted that minority and transgendered sex workers were treated most unfairly by the legal system.

Members of the group complained that Cook County Sheriff Tom Dart’s legal battles with the adult website Backpage.com were harming their livelihood, which had depended on online advertising.

But sex workers insisted that trafficking was a separate issue.

“Trafficking is a horrible, disgusting phenomenon,” Friscioni said. She asserted that more “agricultural and hospitality workers” were trafficked.

But Friscioni and others said when online advertising dries up, sex workers are forced into the streets, which can be much more dangerous.

“I know he’s on some high-level mission to save women,” said one participant. “But we don’t need exit programs with cookies and punch in a waiting room where you watch videos.”

“Busting sex workers and throwing us into a cage does nothing to stop trafficking,” said Catheryn Berarovich.

A male sex worker, who asked to be anonymous, said the criminalization of sex work made it harder to get a job or find housing with a sexually related conviction.

People doing “survival sex work” on the streets or for very low prices were often the ones targeted for stings, said Berarovich.

“I’ve done survival sex work, although I’ve never worked the streets, and it was a way to get out of a bad place.”

The protesters described how Dart’s lawsuits disrupted an “off-the-books” business model that allowed consenting adults to make an agreement to exchange money for sexual gratification.

“Now I have to pay for ads (on Backpage) with [cybercurrency] bitcoin, which changes value every week,” said Friscioni.

They also said the online network helped them communicate with their colleagues about dangerous johns and people to look out for.

Protesters said they wanted to assert their right to support themselves with sex work and demanded autonomy over how they used their bodies.

“It’s not a job I love all the time,” said Berarovich. “No one loves their jobs all the time. But it’s a way to make a living wage and support myself.”