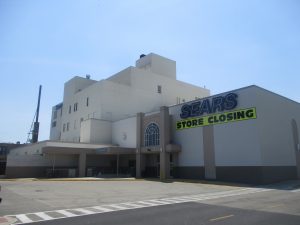 The view of the last operating Sears in Chicago from the store’s parking lot. From here, it’s easy to see the difference between the taller original building and the addition built later. (Photo by Igor Studenkov/for Chronicle Media)

As the closing of Chicago’s last Sears draws near, the residents got one last opportunity to learn more about its history and take a peek into the areas normally closed to the public.

Since opening in 1938, the Sears at 4730 W. Irving Park Road has been an institution of the Six Corners — a Northwest Side of Chicago commercial area around the three-way intersection of Milwaukee Avenue, Irving Park Road and Cicero Avenue. It lasted longer than any of the other area retailers, seeing Six Corners through the toughest of times. The store is expected to close sometime in mid-July, but the date may change depending on how soon it sells off its inventory.

On June 7, Six Corners Association, a local economic development organization organized several “Farewell to Sears” tours led by Dale Harris, who worked at the Sears key shop for 47 years before retiring two years ago. For some attendees, it was a trip down the memory lane. For others, it was a chance to learn about what the store used to be. And most people agreed that, whatever happens to the building once the Sears closes its doors, Six Corners will never be quite the same again.

The intersection is located in the heart of Portage Park neighborhood. From 1930s to early 1970s, the Six Corners was the biggest shopping destination on Chicago’s Northwest Side and one of the biggest retail hubs in the city as a whole. In 1970s, many of the stores closed, and those that remained found it more difficult to attract tenants.

For the past 17 years, the Six Corners Association has been working to revitalize the area. In 2014, the city granted its application to establish a Special Service Area, where property owners pay extra money on top of their regular property taxes to fund various improvements. Among other things, it offers rebates for building facade enhancements, building sidewalk cafes and installing security cameras. It also helps local businesses apply for Small Business Improvement Fund grants.

As Harris reflected during the tour, Sears endured among Six Corners through thick and thin. 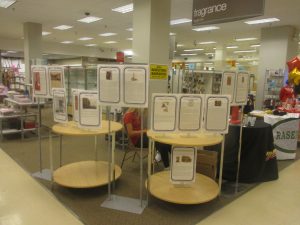 The history display put together on the Sears sales floor to coincide with the Farewell to Sears tours. (Photo by Igor Studenkov/for Chronicle Media)

Harris noted that, in the 1970s, it was the chain’s second-highest volume store, right after the Woodfield location.

But the last decade hasn’t been kind to the Chicago-born chain. It has been closing stores in Chicago and elsewhere. By 2018, only one Sears store remained open in Chicago. And, in April 2018, the company announced that even that was closing.

“Sears has a long, well-respected, beloved history at Six Corners and cemented this shopping district’s reputation as second to only the Loop for the decades that followed its opening,” she said, “Even through economic downturn, Sears was a mainstay and the primary anchor in this community. It’s the longest running business we’ve known.”

Wefenstette said that since becoming the association executive director in 2014, he heard many “Six Corner Stories” from longtime Portage Park residents — and many of them revolved around Sears. For example, she has two close friends whose parents met while working at different parts of the store.

“The fondness for the role that business has played in the community will linger long after its doors close,” she said. “We will certainly miss Sears as an institution, but are inspired by the possibility of the site and the ways in which it can be transformed for the next generation of [Northwest Side] Chicagoans.”

Harris mentioned that Six Corners Association tried to help Sears’ tenants, including the key store and the eye care store, set up shop elsewhere in the shopping district.

To mark the impending closure, the association organized several tours throughout the second half of June 7, with the first tour starting at noon and the last tour starting at 6 p.m. As Harris explained, originally, the store’s management was willing to let the groups go anywhere, including areas that were normally off-limits to the public. But then, their corporate higher-ups intervened, and Harris was only allowed to give the groups a peek inside the area without letting them literally set their foot inside. Furthermore, the residents and members of the media weren’t allowed to take pictures or make visual recordings of any part of the store at any point during the tour.

The Chronicle took part in the noon tour. Harris touched on the building’s history, explaining that the current structure was actually made up of the original building and the later addition. He showed where the Hillman’s grocery store used to be located in the basement and a few hints of the time the current-day shoe section used to be a public cafeteria, complete with a kitchen-turned-storeroom and what used to be an employee restroom.

“Cafeteria closed in the mid-90s because the CEO at the time decided Sears shouldn’t sell food,” Harris explained.

As the tour went up to the fourth floor, Harris touched on how, until 2005, it used to be home for the company’s Midwest division corporate offices, pointing out where the offices used to be located.  He explained how the large spaces between the third floor restroom entrances and the restrooms themselves used to be waiting areas where customers who got tired while shopping could catch their breath. And he pointed out the entrance to what used to be a nurse’s office located nearby.

“We also had our own nurse, and she had her own pharmacy,” Harris said. “Sears used to have everything. We sold everything from diapers to headstones.” 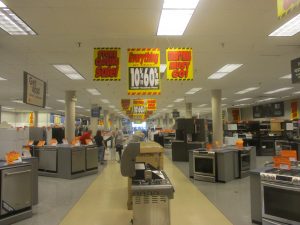 Inside the Six Corners Sears location, the last Chicago location to close, a few weeks before the closing. (Photo by Igor Studenkov/for Chronicle Media)

Harris touched on the parts of the building that some of the longtime customers may remember, but customers may not know was even there. Most notably, he showed a large staircase to the right of the Irving Park Road entrance leading to the basement, with a separate staircase leading up to the fourth floor. Later during the tour, he showed that the stairs had a mural of New York City’s Central Park above the top flight of stairs. Harris said that, as far as he knew, no one knew why the mural was there.

Harris also pointed out where the Cicero entrance used to be located.

Both have been sealed since the late 1990s, because, as Harris explained and some of the older attendees confirmed, theft was an issue and the store wanted to limit the number of entrances and exits.

Harris also touched on another aspect of the store many customers remember — the window displays. The store used to have them on both the Cicero Avenue and Irving Park Road sides, and there was a large display above the Irving Park Road entrance. Harris allowed visitors to take a peek inside the later display, noting that, these days, even employees are advised to avoid it due to safety concerns.

Finally, Harris talked about parts of the Sears infrastructure that customers weren’t aware of. That included entrances to “broadways” — hallways that went through the entire length of the building, which allowed employees to quickly get from one part of the store to another.

“[Back in the 1970s], the only way employees were able to get through the store was by broadway,” Harris said.

He also showed a small part of the building’s enormous cooling system and pointed in the direction of the third floor “dummy elevator,” which was only supposed to be used to move goods.

“And I’m proud to say that no one has ever rode that elevator several times,” Harris deadpanned.

At the conclusion of the tour, visitors were invited to look at the historical display that touched on the Six Corners location and the history of Sears as a whole, as well as to watch a behind-the-scenes video showing some of the areas they weren’t allowed to even peek at — including the sub-basement and the fifth floor.

Harris told the reporters that, while he was “melancholy” about the Sears’ closing, he was glad that he had an opportunity to show people around one last time.

Linda Egebrecht, a lifelong Portage Park resident, recalled singing at the large display window with her church choir in the 1960s. She said that, back then, the store usually invited local choirs to sing there during the Christmas season. The loudspeakers piped the voices down to the intersection below. As Egebrecht recalled, it wasn’t the most glamorous experience — it was a bit cold, and, since it was late in the day, she couldn’t see much of what was going on outside, but she said that it was fun, and was glad that the tour gave her a chance to see that part of the store again. And, overall, she had plenty of happy memories.

“I remember shopping in Hillman’s,” Egebrecht said. “I kind of found it a bit of magicial place. I remember when Marshall’s and other stores [around Sears’ parking lot] weren’t there.”

And she said that, aside from the display window, the tour gave her a chance to revisit several places she recalled fondly from when she was growing up.

“My mother worked here in the late ’60s, early ’70s at the personal department on the fourth floor,” Egebrecht said. “There were some parts of it that I actually remember seeing [from when I visited her] and other [parts] — they changed a lot.”

And how did she feel about the Sears closing?

Malerie Pace, on the other hand, didn’t have memories that went that far back. She has been living in Portage Park for the past 10 years. She went on a tour because, a few years ago, she missed a chance to attend a behind-the-scenes tour organized by Forgotten Chicago organization, so she wasn’t about to miss this opportunity.

“I thought [the tour] was good,” Pace said. “It’s good to hear about things that used to be here. It’s too bad that they don’t have it anymore.”

Meanwhile, the future of the building remains unclear. The store is owned by Seritage Growth Properties, which was spun off Sears’ real estate holdings division in 2014. It currently owns 225 of its former parent company’s properties. In cases where the store closed, Seritage works with local developers to find another use for it.

On May 16, it announced that it teamed up with Tucker Development, a Highland Park based real estate firm to redevelop it, along with a closed Sears in Galewood, into “highly productive mixed-use destinations.” Abe Tekippe, the spokesperson for the partnership, told the Chronicle that, as of June 6, he couldn’t share any information beyond that.

Wefensette told the Chronicle that her organization hopes that the building would be preserved and that they would favor a mix of residential and retail uses.

“In line with the Six Corners Master Plan, we would prioritize the preservation and adaptive reuse of the existing building and, overall, would like to see mixed-use, pedestrian-friendly, people-focused development at each key site,” she said.