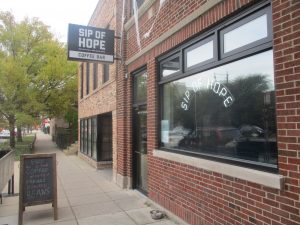 Sip of Hope coffee shop looks to serve as a resource and a safe space for people deal-ing with mental health issues. (Photo by Igor Studeknov/for Chronicle Media)

The majority of people who step through the doors of the Sip of Hope are well aware of its mission. But even if they aren’t, this Logan Square coffee shop doesn’t exactly beat around the bush.

The vestibule has a small shelf with flyers and brochures for mental health service providers on the right, and a bulletin board on the left. And, once a person walks into the main space, the message on the wall to the right spells out the mission.

“Sip of Hope, the world’s first coffee shop where 100% of the proceeds support proactive suicide prevention and mental health.”

As Sip of Hope manager Brian Kmiecik told the Chronicle, the idea was to act as a bridge. Whether they are experiencing mental health issues or they know someone who is, Sip of Hope aims to provide resources they can use, as well as generally to serve as a safe, comfortable space where people can talk about mental health issues.

The coffee shop is already doing community workshops to address the issue — something that it looking to expand on in the near future.

Sip of Hope is a product of a collaboration between Hope for the Day, a Lakeview-based nonprofit, and Dark Matter Coffee, the Ukrainian Village based coffee roaster and coffee shop chain. According to its website, Hope for the Day was founded in 2011 by music event organizer Johathan Boucher after his boss and mentor Mike Scanland committed suicide. By that point, eight people Boucher cared about committed suicide, and Scanland’s death was the last straw. He wanted to let people who may be contemplating suicide know that there are hotlines and resources that can provide help and support — and the nonprofit grew from there.

Kmiecik explained that Hope for the Day teamed up with a number of organizations to get the word out. Dark Matter Coffee jumped at the idea, and they put together a special “Sip of Hope” blend. The packaging has the information about the mental health resources, and all of the proceeds from the sale went to Hope For the Day.

“That was sold online, that was sold in Whole Foods, and after some success of selling that coffee, they were looking for the next steps,” Kmiecik said. “[They thought], after blend was doing so well — why don’t we put up coffee shop?” 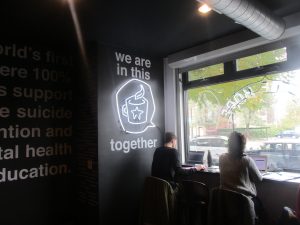 Hope For the Day raised the money to open the coffee shop, with Dark Matter Coffee providing support and their own blends. Sip of Hope opened around six months ago at 3039 W. Fullerton Ave, across the street from the Logan Square branch library.

Kmiecik said that it wasn’t a coincidence.

“It was combination of walking into space and really being able to envision what we wanted to do,” he said. “The public library across street was super, super helpful. They allow us to use their community room once a month [for mental health education workshops].”

Kmiecik said that the growing development in this part of the neighborhood, as well as proximity to Blue ‘L’ Line’s California/Milwaukee and Logan Square stations didn’t hurt, either. And he noted that mental health care was a sensitive topic in Logan Square. When the City of Chicago closed half of the city-run mental health clinics, the neighborhood’s clinic was one the facilities that got the ax.

Since then, community organizations and volunteers throughout Logan Square and the neighboring Hermosa and Avondale community areas are working on establishing a special taxing district that would use property tax revenue to fund a community-run mental health clinic — a campaign that, Kmiecik said, Sip of Hope fully supports.

He explained that Hope For The Day runs the shop as a social enterprise. While it does use the proceeds to cover employee salaries, rent, utilities and other expenses necessary to keep a coffee shop running, everything that’s left over goes directly toward the nonprofit’s mission.

“It’s not helping a guy get a second condo on the Gold Coast,” Kmiecik emphasized. 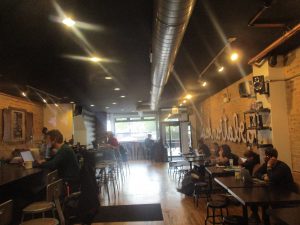 Inside the Sip of Hope coffee shop. (Photo by Igor Studeknov/for Chronicle Me-dia)

He said that the flyers and brochures in the vestibule come from organizations Hope For The Day either worked with already or vetted. And everybody on staff went through crisis intervention training. If someone was to walk in while having a mental health crisis, the staff is trained to provide support and get them to a space where they would be safe.

Most of the time, Kmiecik said, when people do come in, they haven’t reached the crisis point. Sip of Hope provides a safe place, and, aside from picking up informational brochures and flyers, they can talk to staff about, for example, what it’s like to have a therapist.

In many cases, people who walk through the doors had a friend or a loved one who “completed” suicide. Kmiecik said that it important to acknowledge that the experience was traumatic, and they need support, too.

“It has to be addressed the same way,” he said. “And it’s an important part of the grieving process. You know, we like to talk to folks to let them know that there’s groups available, that there are folks they can talk to.”

And Kmiecik said that he was pleased to have mental health professionals holding meetings at the Sip of Hope.

Overall, Sip of Hope wants to serve as a bridge between the community and mental health resources.

“I think it’s important to remind people that it’s OK not to be OK, that we are only human and they go through tough times, and there are resources are available,” Kmiecik said. “That there’s light at the end of tunnel and we want people to know it’s there.” 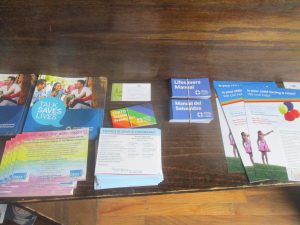 Anyone who walks through the door of the Sip of Hope coffee shop can pick up flyers and brochures for mental health care providers and resources. (Photo by Igor Studeknov/for Chronicle Media)

And they want to do their part to reduce the stigma surrounding mental health. Too often, people are encouraged to try to ignore or push past their issues without actually addressing them.

“[Saying] ‘Boys don’t cry’ is an example of the stigma,” Kmiecik said. “There’s nothing wrong and nothing shameful [about] being a human being and struggling.”

He said that the staff are taught to think of it as like opening a soda bottle after it’s been shaken.

When asked what one can do to deal with the stigma, he said that simply talking about mental health goes a long way. So does checking on friends who are showing signs of depression — acting out of character, becoming distant.

“And not just to ask once, but ask a second time,” Kmiecik said. “There’s nothing wrong with asking — are you really doing OK?”

Overall, he said that the response from the community has been positive.

“The Neighborhood has been receptive and supportive,” Kmiecik said. “We have a lot of regular customers that came in on opening and they’ve been coming ever since.”

While he wasn’t sure he could put the exact number of in, Kmiecik felt that the “majority” of the people came to Sip of Hope to support its mission. While they get customers from Chicago and its suburbs, they’ve also gotten visitors from out of state. Once, they even had a family from Canada stop by.

In the near term, Sip For Hope plans to expand its monthly mental health workshops. Kmiecik said they will be doing more workshops on specific topics, such as Post Traumatic Stress Disorder among first-responders — which, as the Chronicle recently reported, is something emergency services throughout Chicago area are paying more attention to.

Sip of Hope is also looking to record the workshops and turn them into podcasts, so that people who don’t live in Chicago area can benefit from them.

“For right now, we’re focused on utilizing space and focus on potential opportunities,” Kmiecik said. “I can’t really speak on what we expand in future or opening another location. It [would] certainly be great, it would be a dream of ours.”