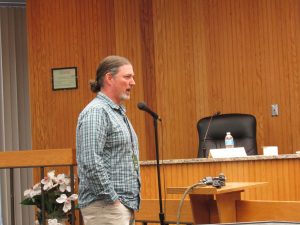 Tom Decker, owner of Chicago Green Insulation, talks to members of the Cook County Gun Violence Task Force during a meeting at Maywood Village Hall last week. Decker said his industry is booming and could employee many Chicago area youth if they received the right training. (Kevin Beese/for Chronicle Media)

Tom Decker wants to see insulation guns instead of handguns in the hands of Chicago area youth.

Decker, the owner of Chicago Green Insulation, said his company and others in the industry are seeing business explode and thinks by providing the right training for teens and young adults, it could get them a job.

“There are 3,500 openings nationwide and the industry is going to grow sevenfold in the next five years,” Decker said.

He told members of the Cook County Gun Violence Task Force last week that programs to train youth in how to install spray foam insulation would be money well spent as it would get them working and off Chicago streets where violence is all too prevalent.

“You need to determine the skills they need for insulation and other services,” Decker said, “and then handle that guidance.”

Cook County Sheriff Tom Dart said that Chicago Green Insulation and similar firms would benefit from connecting with redevelopment agencies such as the South Suburban Land Bank and Development Authority, which could increase their business – and need for employees – even more.

Deno Andrews, owner of Felony Franks, a hot dog joint in Oak Park that hires ex-cons, said government needs to be more like businesses in getting things done.

“I can have two meetings and close a multimillion-dollar deal,” said the former operator of a $36 million consulting business. “I can meet for a year with a village and there is still no decision.” 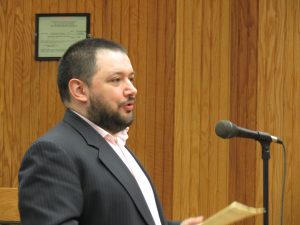 “Having been a legislator, I know that government is bad at producing answers,” Dart said. “There are issues where you’d be lucky to get a decision in your lifetime.”

The sheriff said because the Cook County Jail is under his leadership, he does not have to receive County Board approval to get programs started there. He said he believes there is a role for the county to play in job training.

“I have 200-300 people leaving the jail every day,” Dart said. “I think big thoughts. What can we do to stabilize things for them? What do they need for a skill set?”

Pete Leonard, founder of Second Chance Coffee in Wheaton, said something must be done to give ex-offenders a second opportunity. Too often, he said, when individuals truthfully mark the box on a job application asking if they have ever been convicted of a crime, it is the kiss of death.

He cited the case of his brother-in-law who spent time in prison for an online crime. The owner of the coffee business said despite the individual being brilliant, he had to turn around and fire him and then hire him back as a consult because of his payroll company’s concerns about an ex-con being employed by the firm.

“You can’t find work if you have a felony on your record,” said Leonard, who has hired 34 ex-offenders since opening Second Chance in 2009. “Businesses easily could step up go the plate.”