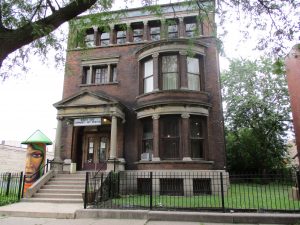 The South Side Community Art Center has a lot to be proud of.

It survived for 76 years, outlasting most of art centers that opened as part of the Works Progress Administration’s Federal Art Project program. It nurtured and continues to nurture the talents of a number of African and African-American painters, sculptors, poets and other artists who went on to find bigger success. And it has been an active part of the community, reaching out to local schools and serving as a public meeting space.

But the center isn’t content to rest on its laurels. Under the leadership of the Executive Director Masequa Myers, it has been hiring more staff, expanding its programming and raising funds to expand the building.

As Myers told the Chronicle, the center’s future is with the community youth, and the center needs to be able to adjust with the times even as it continues to honor the legacy of the past.

The Federal Art Project program was launched in 1935 to put artists to work. It was one of the many federal programs designed to create jobs during the Great Depression. Among other things, the program set out to encourage art education. If the community could come up with the funds to set up a community art center, the federal government would provide funds to help cover the renovations and pay instructors and staff.

At the time, housing discrimination and outright intimidation kept African-Americans confined to a few neighborhoods, most of which were located between 22nd Street, Cottage Grove Avenue, 63rd Street and Rock Island Railroad tracks. Bronzeville was the political and cultural heart of the community. It was home to several African-American newspapers, movie theaters and music clubs. Many black painters and sculptors lived in the neighborhood, but as Myers explained, most galleries wouldn’t display their work. The one exception was Peter Pollack, who owned a gallery in the Loop and chose artists based purely on merit.

Pollack wound up working for the Federal Arts Project. He met with Metz Lochard, who was then the editor of the Chicago Defender, the most widely read black newspaper in the country. Lochard put Pollack in touch with social worker Pauline Reed, who arranged a meeting with a group of artists who would become the center’s founding artists — Dr. Margaret Burroughs, Charles White. Archibald Motley Jr., Eldzier Cortor and William Carter.

“The development of the South Side Community Art Center sprang out of those founding artists who understood how important it is to have a gathering place, a space, a gallery that would put, in one place, the opportunity for people to see fantastic arts,” said Myers.

The group launched a fundraiser to buy a three-story building that remains the center’s home to this day. Located at 3831 S. Michigan Ave., it was originally a mansion built by grain merchant George A. Seaverns. His family lived there until the 1920. Like many mansions throughout Chicago, it was converted into the rooming house at some point after that, but, by 1940, it was empty. 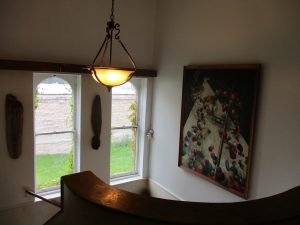 Myers said that the group felt that the building was well-suited for the center’s three reasons for existence — to provide space to showcase work by African-American artists, to educate budding artists and advocate for the community. And it was thanks to the community that they were able to raise $8,000 to buy the building. The center held its first classes on Dec. 15, 1940. On May 7, 1941, then-First Lady Eleanor Roosevelt cut the ribbon, officially dedicating the new facility.

“On that day, it was packed in here,” Myers said. “All the way down Michigan Avenue, shoulder-to-shoulder, people celebrating the art center. “

She noted that about 110 centers of this kind opened thanks to the Federal Arts Project — and this is the only one that’s still operating.

“We are the only art center across the country that is still standing, in the same place, with the original mission, and we never closed our doors, fortunately for us,” she said.

As Myers saw it, the fact that the center’s Board of Directors owned — and still owns — the building was a major reason why it was able to endure. And when the federal funds were withdrawn as the Federal Arts Project ended, the center was able to successfully raise enough funds to fill the gap. Since then, fundraising and corporate sponsorship has gone a long way to help keep the center running.

Through it all, the center’s mission remained the same, even if the way it went about fulfilling it changed somewhat. 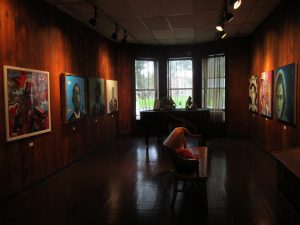 “It changed only according to social climate of the country,” Myer said. “So, in 1950s, there was a move toward putting different and more healthy and wholesome and complete images of African-Americans in world. In the 1960s, it was more of creation of standards of black arts.”

When asked about the social justice component of the center’s mission, Myers said that education was a part of it, as was its ongoing efforts to showcase art in places that lack it. She cited prisons and schools as examples.

“It’s important to put arts in the schools, because how much art is being taken away in our education curriculum,” Myers said.

The center also functions as a community gathering space

“SSCAC — the community knows its reputation, and it knows that person can call here and say ‘we’d like to have community meeting on an incident that just occurred and needs to be talked through, and can we get some space and time here,’” Myers said. “And the answer would always be ‘yes.’ We think it’s important when there’s trauma and violence in our community, there needs to be an outlet.”

Today, the first and second floors have galleries, while the third floor is used to hold classes.

“We have at least four exhibitions a year,” Myers said. “And these are exhibitions that are theme-orientated and thematic.”

Art also hangs in hallways and offices. Myers even put some pieces in the women’s restroom — and she said the men’s restroom would get some pieces later. And she noted that, except for the pieces from the center’s permanent collection, everything that’s on display is for sale.

“It’s a performing arts program that teaches teens how to write a one-act play, public speak, produce, and also to take a position on something in their neighborhood that they’d like to change in their environment for the better. So its civic engagement program as well.”

The teens split into three groups of five. Together, each group figures out what kind of play they want to do, put the play together and perform it before a live audience.

“Part of the program is to teach job etiquette,” Myers aid. “Some of the soft skills they learn in the program is collaboration, which becomes a very important skill in the real world.”

In additional to classes, the center hosts panels and community events. Every first and third Friday of the month, between 7:30 and 11 p.m., it hosts the open mic style Artist Lounge. It also regularly hosts film screenings.

“We have screenings of controversial movies and we have discussions afterwards,” Myers said.  “It’s why we call it ‘filmversations.’”

And the center is planning to expand its offerings. It is currently working to get a National Historic Landmark status for the building, which would allow the center to qualify for tax credits to help fund it.

“With that expansion comes technology, so we can start offering computer graphics, as well as any of the new technology that art is exploring in the 21st century,” Myers said.

Ultimately, she believes that getting more young people involved in the center is the key.

“I’m consciously, since Day 1, looking for the younger generation to continue the legacy of South Side Community Art Center, which is why I have young people on staff and why I have [youth-orientated] programming like the Artist Lounge to bring in younger demographic,” Myers said. “It’s another sure way to last another 76 years.”

—  South Side Community Art Center Looks to the Future  —-