A new location for SoxFest 2020 meant a scramble to reserve parking in advance at McCormick Place and good walking shoes.

Larger digs for Sox fans, for those lucky enough to get passes to the sold-out two-day event, provided more space for amenities and attractions starting Jan. 24. 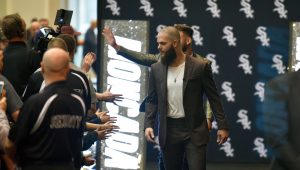 SoxFest was at the Hilton Chicago in recent years.

On Friday, there was on-demand, on-site parking, but parking reservations for Friday were sold out by Thursday, causing early bird fans to arrive early.

They queued outside of the Skyline Ballroom. Lines into the early evening snaked into an overflow room and beyond.

Late Friday morning, many pass holders watched the media set up along a platform by the black carpet where a red carpet experience with baseball celebrities took place after 3 p.m. 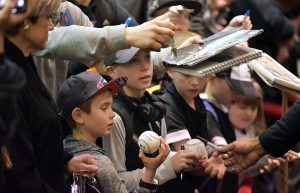 Greyson Gibbs (left), 7, a second-grader and sibling Carter Gibbs, 10, a fifth-grader, both of Northbrook, are on the black carpet opening ceremony sidelines, and are obtaining autographs. (Photo by Karie Angell Luc/For Chronicle Media)

Todd Griglin of Cape Coral, Florida said he was the first fan in line, starting his Friday wait at 3 a.m. after his flight.

Griglin, raised in Chicago, said he’s been coming every year to the annual SoxFest event since it launched in 1992.

“They’re young, they’re going to be a force to be reckoned with, not only for 2020, but for the next decade.”

What does it mean to be a Chicago White Sox fan? 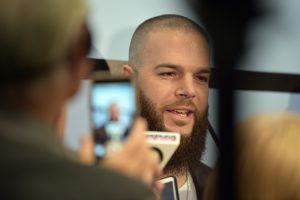 Griglin, who said he much prefers the White Sox over the Chicago Cubs, added about baseball, “It’s in my blood.

Griglin said he’s come to know fan regulars who are among the first group in line. They bring folding chairs and snacks, perhaps even sharing tailgate style.

Besides cell phones, they have iPads plus books to pass the time while waiting.

“You talk to everyone all night, all morning,” Griglin said. “It’s almost like a White SoxFest family.

“We all get along, and the people are the same 30 people out here all of the time.”

Seated next to Griglin in line was his wife, Connie. 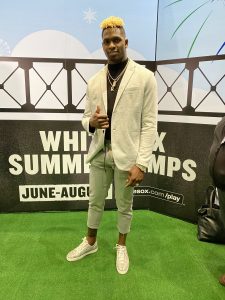 “They’re going to be a great team.”

Cheri Griglin of Park Ridge, Todd’s sister, also was in the queue.

About this year’s team, “Hey, “I’m excited, they look good, hopefully they feel good and I hope we enjoy the season,” Cheri Griglin said.

Inside the ballroom, activities awaited, including autograph sessions, a stage, games, a ballfield and opportunities to buy keepsakes like bobbleheads and baseballs.

Before the opening ceremony, members of the media were invited to sample the launch of White Sox golden ale made by Goose Island Beer Company, official White Sox craft beer partner.

“This is my recipe,” said Keith Gabbett of Oak Park, brewmaster at Goose Island.

“I wanted something that anyone can drink,” Gabbett said, of the inspiration for his recipe.

“I wanted a beer for the people.” 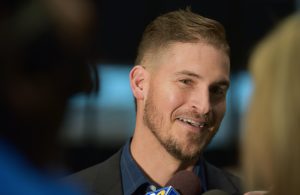 “I started working at the company in 1988.,” Ahsmann said. “I am ridiculously proud of where we’re at.”

“Back then,” he said of the company’s early days, “It wasn’t even a dream that we could work with the White Sox. We’re really excited about this partnership.”

Guillen took a moment to look back on past seasons.

“We’ve been through tough times, last couple of years,” Guillen said. “Hopefully, this year will be better.”

Members of the media had the opportunity to talk with players, past and present. This was before the opening ceremony and the subsequent black ribbon-cutting by players. 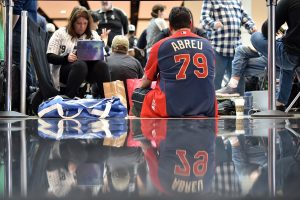 With Jose Abreu jersey No. 79, Todd Griglin (right) of Cape Coral, Florida, said he was the first fan in line, starting his Friday wait at 3 a.m. Griglin, raised in Chicago, said he’s been coming every year to the annual SoxFest since it launched as an event in 1992

Greyson Gibbs, 7, a second-grader and sibling Carter Gibbs, 10, a fifth-grader, both of Northbrook, were on the black carpet sidelines and had baseballs autographed.

“Not only am I excited, but I’m jealous,” said the siblings’ father, Chris Gibbs, with a smile.

“This is a really awesome experience for them and I’m just getting pleasure seeing how excited they are, how much fun they’re having.”

After the ribbon-cutting, fans passed through the same gates to the sound of professional drummers. The decorated entrance featured cornstalks, Field of Dreams film style.

Jose Abreu had a shout out to fans.

Yoan Moncada said this season will be one to watch and he would hope that fans would attend. 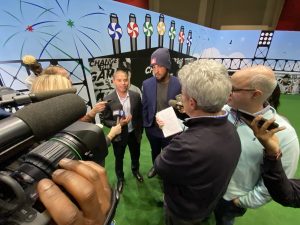 “I just want to invite them to the stadium to see us play, to see us perform because I think we’re going to be good,” Moncada said.

“New decade,” Grandal added. “A lot of things can happen.”