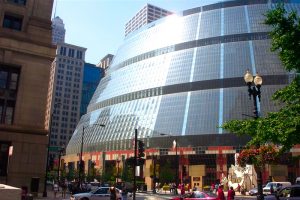 SPRINGFIELD – State officials on Wednesday, Jan. 27 announced the purchase of a 17-story office building in Chicago’s West Loop for $73.25 million, a move Gov. J.B. Pritzker’s office said will “pay for itself.”

The 429,316-square-foot building at 555 West Monroe is set to become the new office space for over 1,000 Chicago-based state employees currently working in the James R. Thompson Center and other downtown locations leased by the state.

A spokesperson for the state’s department of Central Management Services said that state agencies expect to begin moving into the new building as early as April of this year. Once the move is completed, it will signal the end of the state’s time at the aging Thompson Center on Randolph Street, which has housed the state’s Chicago offices since 1985.

State officials cited staff consolidation and cost-saving measures as primary reasons for the purchase of the new office space.

“The acquisition of 555 West Monroe is an important step in our effort to optimize the State’s real estate portfolio, reduce operating expenses, and enhance workforce and workplace performance,”  Pritzker said in a statement on Jan. 27.

According to a news release, the state currently leases office space in seven different locations around downtown Chicago at a cost of $21.3 million in base rent and operating costs.

The Illinois Department of Central Management Services said that approximately 2,200 employees are currently based at the Thompson Center, with an additional 1,300 working in other leased facilities.

CMS said that after conducting an analysis in coordination with other state agencies, it determined that only about 900 state employees require an office in the Loop, and that the remainder “can be located elsewhere”.

Pritzker said that the state’s purchase of 555 West Monroe and subsequent relocation from the Thompson Center will save a significant amount of money in the long run.

“This building pays for itself because we’re terminating a patchwork of expensive downtown leases,” Pritzker said in the release.

The purchase of the new building is the culmination of the second phase of a three-part plan led by CMS to “review and restructure” the state’s real estate portfolio.

The third phase of the plan will include the final sale of the Thompson Center, a proposal championed by former Gov. Bruce Rauner that has been a top target for cutting back on state expenses in recent years.

Pritzker signed a bill in April 2019 to begin the process of selling the Center and exploring an alternative location for state offices in downtown Chicago.

During its abbreviated session last year, the General Assembly set April 5, 2022 as a target deadline to reach an agreement on the sale of the outdated building.

The Center, named for the 37th governor of Illinois and designed by famed German-born architect Helmut Jahn, was initially hailed as a masterpiece of postmodern architecture when it opened in 1985.

In recent years, the building has been criticized for its hulking size and high operating costs due to various inefficiencies. The building costs the state over $17 million annually in operating expenses, according to CMS.

CMS cited “prolonged deferred maintenance and delayed capital projects” as reasons for the Thompson Center’s declining condition. The department estimates it would cost between $325 and $525 million dollars to modernize the Thompson Center and bring it into a state of good repair.

State officials said that minimal work would be needed at the 555 West Monroe building to bring it up to state standards.

“This purchase will provide significant operational savings while providing a state-of-the-art location that meets the specific needs of our operations,” CMS Director Janel Forde said in a statement.

555 West Monroe was built in 2002 and designed by Chicago architecture group Skidmore, Owings & Merrill. It achieved Leadership in Energy and Environmental Design certification in 2008 and formerly served as a regional headquarters for Pepsi.

A spokesperson for CMS said that the state is currently drafting requests for proposals for a developer of the Thompson Center with the goal of choosing one by the end of March.