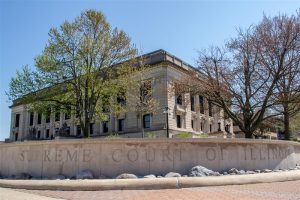 The decision by the state’s High Court comes at a time when police departments throughout the country, including the Chicago Police Department, have been the target of protests and civil unrest.

The Illinois Supreme Court ruled this week that the city of Chicago may not destroy records of police misconduct that are more than five years old, despite a contract with city’s police union that requires city officials to do so.

In a 6-1 ruling Wednesday, June 17 the high court said that a state law requiring public records to be maintained supersedes a provision in the city’s contract with the union.

The decision comes at a time when police departments throughout the country, including the Chicago Police Department, have been the target of protests and civil unrest in the wake of the May 25 killing of George Floyd, an unarmed black man who died when a white Minneapolis police officer knelt on his neck for nearly nine minutes.

The provision in the contract with the Fraternal Order of Police Lodge No. 7 requiring the city to destroy records of investigations and discipline arising from police misconduct has been the subject of litigation and arbitration for nearly thirty years.

The provision dates back to 1981 and has remained largely unchanged since. The current language states that, “All disciplinary investigation files, disciplinary history card entries, Independent Police Review Authority and Internal Affairs Division disciplinary records, and any other disciplinary record or summary of such record other than records related to Police Board cases, will be destroyed five (5) years after the date of the incident or the date upon which the violation is discovered, whichever is longer.”

Beginning in 1991, however, federal courts began intervening to block the destruction of those documents, especially those that were the subject of federal investigations into a “pattern or practice” of police misconduct.

In 2011 and 2012, the court noted, the FOP filed grievances against Chicago for failing to comply with terms of the contract.

While those grievances were pending, both the Chicago Tribune and Chicago Sun-Times filed requests under the state’s Freedom of Information Act for records in the city’s possession dating back to 1967.

After city officials notified the union that it intended to comply with the requests, a Cook County Circuit Court judge issued a series of preliminary injunctions effectively preventing the city from releasing any records that were more than four years old or that were the subject of a U.S. Department of Justice investigation.

In January 2016, an arbitrator in the FOP’s grievances sided with the union and ordered the two sides to reach an agreement on how to proceed with the destruction of the records. In response, the U.S. Attorney’s office sent a letter to the city ordering it to preserve documents relevant to its investigation.

In 2017, both the Justice Department and a task force appointed by the city issued reports specifically citing the contract language as an impediment to oversight and reform of the Police Department.

Finally, in October of that year, a circuit court judge issued an order overturning the arbitrator’s decision to enforce the contract, finding that the language “violated a well-defined and dominant public policy to preserve government records.”

At issue was Illinois’ Local Records Act, which requires local governments and school districts to preserve public records without first seeking permission from a Local Records Commission and demonstrating that the records “do not have sufficient administrative, legal or fiscal value to warrant their further preservation.” Violation of that act is a Level 4 felony.

The union argued in court that another statute, the Public Labor Relations Act. It states that whenever there is a conflict between that act, or any collective bargaining agreement negotiated under it, and any other state law, the labor law prevails.

In its ruling Wednesday, however, the court said there is a longstanding exception to that principle whenever the contract provision “is repugnant to established norms of public policy.”

In the case of the police contract, the court found that laws requiring retention of public records are a clear statement of public policy. Or, stated more specifically in the State Records Act, “that government records are a form of property whose ownership lies with the citizens and with the State of Illinois.”

“While parties are generally free to make their own contracts, this court has long held that when a conflict exists between a contract provision and state law, as it clearly does in this case, state law prevails,” Justice Lloyd Karmeier wrote for the majority.

In a dissenting opinion, Justice Thomas Kilbride argued that the original arbitration award did not order the destruction of documents. It only ordered the two sides to negotiate, which he said was not a violation of the Local Records Act.

He also argued that there is an equally well-established public policy in Illinois to enforce collective bargaining agreements.

“To repeat, the issue of police misconduct is a serious issue that must be confronted by society,” Kilbride wrote. “This court was asked, however, to consider a fundamental principle of labor law, namely, the validity and enforcement of arbitration awards.”