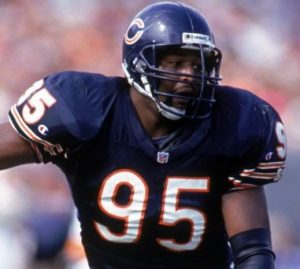 SPRINGFIELD – A case before the Illinois Supreme Court centers on whether a former Super Bowl MVP has a right to learn the identity of a woman who accused him of sexual harassment, allegedly leading to the termination of contracts between his energy services company and a subsidiary of Exelon Corporation.

Richard Dent, a Pro Football Hall-of-Famer and Chicago Bears defensive lineman from 1983 to 1993, is the proprietor of RLD Resources LLC, a business specializing in energy products and services, according to its website. RLD had several energy supply and marketing contracts with Constellation NewEnergy Inc. and related companies, according to court documents. Constellation is a subsidiary of Exelon.

But Dent’s lawyers, led by in-house attorney Paul G. Neilan, alleged that those contracts were terminated on Oct. 1, 2018, after Dent was informed in a Sept. 14, 2018, meeting with two of Constellation’s lawyers that he was the subject of a sexual harassment complaint by a female employee of Constellation.

A letter sent from Constellation to Dent’s lawyers in December 2018 concluded that “although Mr. Dent denied the allegations, his denials were not credible and the investigation concluded that the reports accurately described behaviors that were, at a minimum, in violation of Exelon’s code of business conduct, completely outside the norms of socially acceptable behavior, and demeaning to Constellation employees.”

Now, the court is asked to decide whether the employee — identified in Dent’s court petition as Person A – and a witness to separate “drunk and disorderly” conduct by Dent at a different location than where the alleged harassment occurred – identified as Person B — are protected by the court principle of “qualified privilege,” allowing for their anonymity in a sexual harassment case.

Dent’s lawyers argued that he’s entitled to know the identities and locations of Person A and Person B through the pre-suit discovery process because their statements were false and defamatory. The individuals, not Constellation, are the publishers of the defamatory claims, his lawyers argued.

Constellation’s lawyers argued the employees should remain anonymous because their statements were made as part of a privileged confidential workplace investigation of sexual harassment.

Specifically, Person A alleged that Dent told her at a 2016 Constellation-sponsored golf outing that she had “a butt like a sister.” Then, at a pre-golf outing party held at the Shedd Aquarium in July 2018, Dent allegedly groped the woman, according to court documents.

Person B, the witness cited by Constellation, allegedly noted he observed that Dent was “drunk and disorderly” while picking up golf materials at the nearby Marriott Hotel in Chicago at an event related to the 2018 outing but separate from where the alleged harassment occurred.

Dent’s petition is also seeking the identity of Person C, which his legal team identified in the court filing as an “investigator” examining the harassment claims on behalf of Constellation.

In their own court filings, Constellation’s lawyers noted that the investigators were in fact Grace Speights and Theos McKinney, the two lawyers that spoke to Dent during the Sept. 14, 2018 meeting.

Constellation’s lawyers argued that because Dent now knows the identity of Person C, he can file a defamation suit against them and later seek the identities of Persons A and B.

But Dent’s team said McKinney and Speights did not identify themselves as investigators to Dent at the meeting, and Person C’s identity was not known when the petition before the court was filed, meaning it’s outside of the scope of what the court should consider.

The case started in 2019 in Cook County Circuit Court, which sided with Constellation. But the 1st District Court of Appeals sided with Dent, which led Constellation’s legal team to bring the challenge to the Supreme Court.

Constellation’s attorney, J. Timothy Eaton, of Taft, Stettinius & Hollister LLP, urged the court in oral arguments Wednesday, Sept. 22 to reverse the appellate court’s decision, saying the “chilling effect” would be “obvious” if Constellation was forced to divulge the identity of the alleged victim and the witness.

“This court must balance a potential defamation plaintiff’s right to redress against the danger of setting the standard to prove an abuse of privilege so low that it effectively chills the victim’s right to speak confidentially and exposes the victim to a retaliatory response,” Eaton argued.

The fact that Dent denies the allegations was not enough to overcome the qualified privilege because Dent did not provide facts to show that the allegations were made “in bad faith,” Eaton said.

But Justice Rita B. Garman questioned whether someone in Dent’s position could ever “gain enough info to overcome” qualified privilege if the identity of the accuser remains unknown.

Eaton reiterated the court must balance Dent’s rights to redress “with the rights of the victim who, in an interview, assumed confidentiality.”

“The studies have shown that in combating sexual harassment in the workplace, less than 14 percent of the workplace sexual harassment victims report their harassers,” he said. “Most of them don’t report because they fear retaliation and because confidentiality concerns are part of why they don’t come forward to complain.”

More than 30 organizations, including ACLU Illinois, Women Employed and the National Women’s Law Center, filed a brief in support of Constellation’s argument.

Dent’s team argued in court filings that because the contracts were at-will, Constellation could have protected the identities of persons A, B and C by terminating the contracts without mention of sexual harassment. That they did not do so means “Constellation’s actions repudiate its own warning” regarding fears of retaliation, according to a court filing.