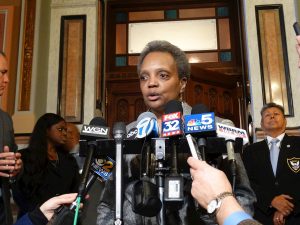 Chicago Mayor Lori Lightfoot speaks with reporters Tuesday at the Capitol in Springfield as she lobbied lawmakers to pass legislation to make it more economically feasible for a new casino to open in Chicago. The General Assembly failed to pass any legislation aiding the city before Thursday’s (Nov. 14) end of the veto session. (Photo by Peter Hancock/Capitol News Illinois)

SPRINGFIELD — Illinois lawmakers adjourned the fall veto session Thursday without voting on a bill to clear the way for development of a Chicago casino, despite last-minute efforts to get one through the House.

Instead, they passed a measure that makes only technical changes to the massive gambling expansion bill they passed this spring. That bill adds measures dealing with fingerprinting and other issues that the Illinois Gaming Board said were needed in order to process applications for all the new casinos authorized by that bill, as well as sports wagering.

Without that technical bill, its supporters said, those new gambling venues could not go forward, and the state would never see the revenue that has already been earmarked for large parts of the $45 billion public works package, or “capital bill,” that was also approved in the spring session.

But the failure to act on the larger casino bill angered many Chicago-area lawmakers who accused their downstate colleagues of engaging in “regionalism.”

“You know what else is going to jeopardize the capital bill?” Rep. Kelly Cassidy (D-Chicago) asked on the House floor. “Not having a Chicago casino.”

Cassidy noted that, earlier in the day, Chicago-area lawmakers had supported a bill to consolidate suburban and downstate police and fire pension funds, a bill that Gov. J.B. Pritzker’s administration had said was critical to stabilizing those funds financially.

“The Chicago members took the vote that didn’t help our police and fire (pension funds) on the promise that they would be made whole later,” she said. “We took a leap of faith. But this body … needs to stop the regionalism.”

Afterwards, though, Cassidy said she wasn’t completely surprised by what happened.

“I’ve been here going on 10 years, and I’ve seen gaming bills collapse over and over again,” she said. “Big bills tend to do that. So I’m not going to point the finger at what happened with this one. But I think we could have gotten it done and I’m disappointed we didn’t.”

Revenue from a Chicago casino would be split between the city and state, with the city’s share earmarked for Chicago’s own troubled pension funds.

The original gambling bill passed this spring had set up a special tax structure for a Chicago casino. It called for levying the operator of that casino a special 33-percent “privilege fee” on top of the normal taxes levied against revenue from slot machines and table games.

But a feasibility study performed over the summer concluded that under that tax structure, such a casino would not be viable, and it recommended lawmakers make changes during the veto session.

On Wednesday, Senate President John Cullerton (D-Chicago) said during a committee meeting that progress in the House had stalled, and he introduced his own bill in the Senate, even though there was no procedural way that bill could have gotten through both chambers before Thursday’s adjournment.

Meanwhile, though, negotiations continued throughout the night Wednesday, and early Thursday morning Rep. Robert Rita (D-Blue Island) introduced amendments to a previously-passed Senate bill that contained the language for a Chicago casino, as well as numerous other amendments to that law.

But after lengthy closed-door caucus meetings on both the Democratic and Republican sides, it became clear the bill didn’t have enough support to pass.

“You know, we were working, and we were working very diligently, very hard,” he said in an interview after the House adjourned. “And it comes down to the votes and seeing where we’re at and making sure we had the right mix. There was a little uncertainty. You know, did we really have them, do we not? We were pretty close (Wednesday) night when we did our roll calls.”

The failure to pass a Chicago casino bill came despite personal lobbying efforts by newly-elected Chicago Mayor Lori Lightfoot, whose city faces a projected deficit of more than $800 million.

Proponents of the casino said they will resume their efforts when the General Assembly reconvenes Jan. 28 for the start of the 2020 session.