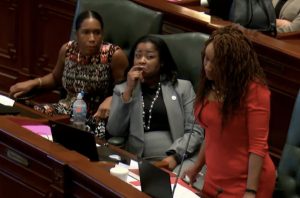 State Rep. Litesa Wallace (D-Rockford) is concerned that the same urgency that was shown last week in tackling the Equal Rights Amendment will not be shown with other issues of equality and equity.

As a single black mother, Wallace, who will be leaving the state House when her term is up, admitted she was conflicted on the ERA issue, noting that women have not been treated as equals for centuries, but that “there are no constitutionally ingrained rights for a black man in America.”

With emotion in her voice and frequently wiping tears from her eyes, Wallace, the daughter of a man who worked on a plantation, said she regularly has to pick between the realities of being black and being a woman — “and that’s impossible.”

She said for centuries women have been asking if they are equals, “and the answer we continue to hear is a resounding ‘no’ almost every day.”

Wallace said she is bothered by the fact that people don’t find women of color worthy of the same type of gentleness, protection and peace as “people who don’t look like us.”

Last week, Illinois became the 37th state to pass the Equal Rights Amendment, 36 years after the federal deadline for states to pass the constitutional amendment.

“It’s never too late to protect the rights of women in America,” state Rep. Lou Lang (D-Skokie) said in talking about the amendment.

Should one more state pass the measure, proponents argue they would have the lobbying power to get Congress to extended the deadline for the amendment’s passing as federal lawmakers did in 1979, the original deadline for the measure’s passage. However, five states have rescinded passage of ERA.

Lang noted that the framers of the U.S. Constitution were all men and that it is a different country today than when the document was written. 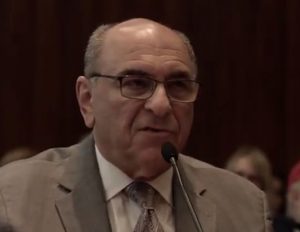 State Rep. Lou Lang (D-Skokie), sponsor of Illinois’ resolution for the Equal Rights Amendment, testifies at a state hearing about the issue. “It’s never too late to protect the rights of women in America,” Lang said about the legislation that was never passed by the federal deadline more than 30 years ago. (YouTube photo)

Lang said it is right to give women the respect they deserve in the Constitution. He said it is also time to put away red herrings.

The Skokie lawmaker pointed out that there has been equal rights language in the Illinois Constitution since 1970 and there have not been horrors as opponents of the measure have foretold.

“In 2018, it is unconscionable that the women of America still have to fight for the rights they ought to be due in this country,” Lang said.

Democrats voting against the amendment were state Reps. Monica Bristow of Godfrey, Jerry Costello of Smithton, Natalie Phelps Finnie of Elizabethtown, Mary Flowers of Chicago and Rita Mayfield of Waukegan.

State Rep. Margo McDermed (R-Mokena) was not present for the vote.

The amendment is simply not needed, according to state Rep. Terri Bryant (R-Murphysboro). 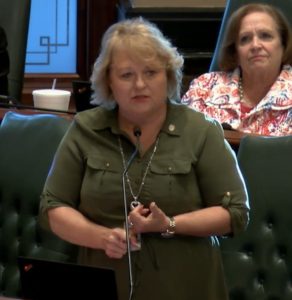 Bryant said she has been married 32 years and her husband “wouldn’t dare” tell her what to do “because we have mutual respect one for another as should we all have one for another.”

Having worked 20 years in the Department of Corrections, she said she was reminded on a daily basis that she was living in a man’s world.

“When new women came into the Department of Corrections sometimes I would take them off to the side and say, ‘Listen, men don’t fight the same way that women do.’ … We are wired a little differently. That’s the way God made us. That doesn’t mean we’re not equal because we do things differently.”