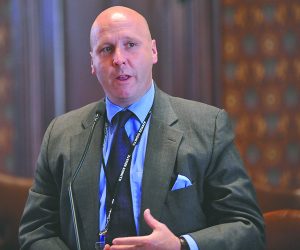 A state senator is facing embezzlement charges for allegedly fraudulently receiving a salary and benefits from a labor union for which he did little or no work.

State Sen. Thomas Cullerton, 49, of Villa Park, is charged with 39 counts of embezzlement from a labor union, one count of conspiracy to embezzle a labor union and employee benefits plan, and one count of making false statements in a health care matter.

The indictment against Cullerton was returned Aug. 1 in U.S. District Court in Chicago.

Cullerton’s arraignment in federal court has not yet been scheduled.

According to the indictment, Cullerton was a member of Teamsters Local Union 734 prior to assuming office as a state senator.  After his election in November 2012, Cullerton was no longer an eligible participant in Local 734’s health and pension funds. In March 2013, while Cullerton was serving in the Illinois Senate, the president of Teamsters Joint Council 25 hired him as a purported union organizer. The full-time, salaried position included benefits from Local 734’s health and pension funds, due to an agreement Joint Council 25 entered into with Local 734 that same month, the indictment states.

The charges allege that for the next three years Cullerton did little or no work as an organizer. When Joint Council 25 supervisors requested that he perform his job duties, Cullerton routinely ignored them, the indictment states.

From March 2013 to February 2016, Cullerton fraudulently obtained from Joint Council 25 and its members $188,320 in salary, bonuses, and cellphone and vehicle allowances, as well as $64,068 in health and pension contributions, according to the indictment. Cullerton used the proceeds of the payments to pay personal expenses, such as his mortgage, utilities and groceries, the charges allege.

The indictment alleges that Cullerton also fraudulently obtained approximately $21,678 in reimbursed medical claims from Local 734’s Health and Welfare Fund. Cullerton submitted or caused to be submitted to medical providers information that made it appear he was a “route salesman” for Local 734, the indictment states. The false information concealed and covered up the fact that Cullerton was not eligible for participation in the fund since he was not regularly scheduled to work at least 30 hours per week for Local 734, Joint Council 25, or any other employer that participated in the fund, according to the indictment.