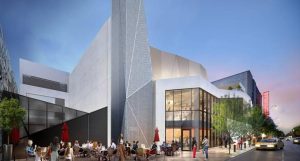 Designed by world-renowned architect Gordon Gill FAIA of Adrian Smith + Gordon Gill Architecture, with theater design and acoustics by Charcoalblue and construction by Norcon, the expanded Steppenwolf campus is a cultural nexus for Chicago and arts-driven learning for Chicago youth in The Loft, Steppenwolf’s first-ever dedicated education space.

Opening to the public next month, the Liz and Eric Lefkofsky Arts and Education Center is the largest new permanent cultural asset to open in the City of Chicago in 2021.

The $54 million new building is part of Steppenwolf’s multi-phase $73 million Building on Excellence expansion campaign, which has raised $56.1 million to date, thanks to robust civic support from individual donors, foundations, corporations and government funding.

As Steppenwolf prepares to invite audiences, artists and students to experience the next chapter of its extraordinary history, it celebrates the community of donors whose generosity has made this expansion possible, led by a $10 million gift pledged by Steppenwolf’s Board Chairman Eric Lefkofsky and Liz Lefkofsky to establish the Liz and Eric Lefkofsky Arts and Education Center.

Additionally, in honor of her lifetime of extraordinary partnership and support of Steppenwolf and its artists, and in recognition of a major gift from the Zell Family Foundation, the new theater in-the-round is named the Ensemble Theater in Honor of Helen Zell.

“As we prepare to open our expanded home, Steppenwolf is thrilled to acknowledge two seminal partnerships that have made our historic capital project possible. The ensemble, board and leadership are truly humbled by Liz and Eric Lefkofsky’s remarkable generosity and are honored to name our new building the Liz and Eric Lefkofsky Arts and Education Center in honor of their visionary leadership. Through word and deed, Liz and Eric embody the entrepreneurial spirit of this company and are true champions of programs that support and empower Chicago youth. As such, we can’t imagine our building bearing any other name,” says Executive Director E. Brooke Flanagan.

Flanagan continues, “Naming our new theater in-the-round the Ensemble Theater in Honor of Helen Zell appropriately recognizes the long-time partnership Helen has provided to the artists of Steppenwolf. Leading with an authentic generosity of self and spirit over the years, Helen has supported artistic risks that allowed the ensemble to break the mold on theatrical expression and launch an extraordinary collection of new American plays. Having the named support of these trailblazing Chicagoans at the heart of our company sets the stage for the next chapter in our history—and the promise of a continued legacy of bold productions and transformational programs for teens.”

Steppenwolf’s Building on Excellence campaign has received 15 gifts of more than $1 million to date, including major gifts from the Lefkofskys and Zell Family Foundation.