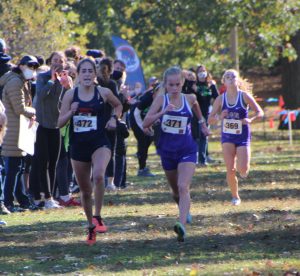 In her first race of 2020, Huskie senior Nora Wollen (left) wills herself along the backstretch. A 2019 All-State runner, Wollen has been sidelined with a fibula stress fracture. “I’m so proud of her willpower to keep pushing,” says OPRF coach Ashley Raymond. (Photo courtesy of OPRF Girls’ Cross-Country)

Beyond any doubt, this year’s edition of the Oak Park and River Forest girls cross-country team is the best in school history.

On the strength of a second-place showing at the Class 3A Sectional held in Lincoln Park on Saturday, Oct. 31, the Huskies stamped an exclamation point on that fact.

Only Naperville North — the state’s top-rated squad and winners of the last four state championships — outperformed OPRF in a 15-team field that covered the three-mile course just south of the Lincoln Park Zoo.

And individually, nobody came close to matching Huskie junior Josephine Welin, who was indispensable to the team’s strongest sectional finish ever.

For the second time in seven days, Welin shattered the course record as well as the OPRF record. Her 16:33 time was a remarkable 22 seconds swifter than her regional effort, which had shaved 12 seconds off the all-time OPRF mark.

Welin’s sectional triumph also represents the fastest time for all Illinois high school girls this year. Only one other competitor came within a minute of her — Naperville North’s Maggie Gamboa, who was a whopping 40 seconds behind.

“From the very first step of the race, it was clear that Josephine was ready to put up a big time,” said OPRF coach Ashley Raymond. “Each week, she is gaining more confidence and learning more about her limits. She has big goals and I can’t wait to see what she does at the ShaZam Championships next weekend.”

Welin ran her first mile in 5:19, an especially strong pace that she sought to come close to maintaining the rest of the way.

“I knew I was ready to go fast. I didn’t know I was going to go so fast this week,” Welin said. “I’m really happy and confident in my abilities now.”

For at least the past three decades — and very likely in the entire 40-year span of the girls program, as records are unclear — OPRF has never finished as high as runner-up at sectional.

Other Huskies likewise turned in strong times, particularly sophomore Avery Minnis (16th place, 18:25), freshman Lenny Sterritt (18th, 18:33), and senior Parker Hulen (24th, 18:44). Hulen’s result was especially impressive, coming on the heels of injuries that limited her to only three prior races this season.

Perhaps the most inspirational Huskie on the day was senior Nora Wollen, competing for the first time all season after earning All-State honors, alongside Welin, last year.

For the past few months, she has gradually recovered from a stress fracture to her fibula and was finally able to run in practice for only a few days this past week. Still getting back into racing form, Wollen visibly labored for much of the race. But without her 33rd place finish, in 18:54, the Huskies would not have held off Downers Grove North for second place.

Despite her inability to train like her competitors, “Nora decided to have confidence anyway. It took so much guts,” said Raymond, who was moved to tears as she watched Wollen finish. “I’m so proud of her willpower to keep pushing.”

The gritty display was a fitting capstone on the four-year varsity competitor’s career. Fifty-one weeks ago, at last year’s state finals, Wollen turned in a 17:07, within a second of breaking the school’s record at the time and good for 15th place, one spot ahead of Welin.

This year, as Welin has pulled away from field after field, Wollen has trained on a stationary bicycle and worked on her conditioning through other exercises. “I’m really proud of what I did,” said Wollen. “I’ve been working in the dark for so long and I am so excited to race finally.”

Placing sixth for OPRF was junior Samantha Duwe (46th, 19:13), while senior Maggie Rose Baron placed seventh for the Huskies and 51st overall. Like Wollen, Baron is a captain and four-year varsity athlete; her 19:21 time was a dozen seconds faster than her finish a week earlier in the regional race.

To accommodate COVID-19 social-distancing concerns, the field of 118 runners — drawn from the 15 teams and those who had qualified through their own individual Regional performances — was split into four heats. The first heat consisted of 18 runners, mostly those in the seventh slot, while each of the subsequent heats drew from two slots apiece and culminated with the fastest group.

Naperville North, whose mascot is also the Huskies, led the pack with 41 points. Next was OPRF (91 points), challenged closely by Downers Grove North (99 points), while Oswego East (128 points), and Downers Grove South (159 points) rounded out the top five.

This year, the sectionals are the last of the Illinois High School Association-sanctioned events. In place of the state finals, a de facto championship for Class 3A is happening on Nov. 8 at Three Sisters Park in Chillicothe, near Peoria.

ShaZam Racing and MileSplit Illinois, a pair of companies that serve cross-country competitors, have organized the series for all three prep divisions — Classes 1A, 2A and 3A. OPRF is in Class 3A, comprised of those schools with the largest enrollments.

As with other teams invited, OPRF’s top runners are forming a club to compete in that invitational event. It is reasonable to project them as a top-five club, which would surpass OPRF’s best finish of 10th place, achieved in 1984 and 2018.

Though IHSA rules prohibit coaches from mentoring these clubs at the invitational, Raymond anticipates the athletes will turn in a memorable finish.

“I have so much confidence in our seniors to lead the team this week and into the ShaZam Championships,” said Raymond. “They are a close group that will work together and show up ready to give it their all for their team one more time this year.”

For the complete results of the Class 3A Sectional at Lincoln Park, hosted by Whitney Young High School, go to: https://www.athletic.net/CrossCountry/meet/180473/results

Matt Baron is the father of an OPRF girls cross-country runner.