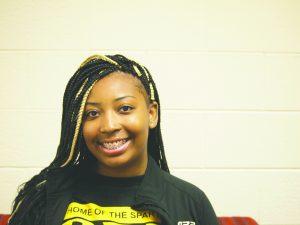 When Javionna Williams says she plans to open a facility for the homeless in Chicago’s Englewood neighborhood, it is hard to envision anything keeping that from coming to fruition.

The valedictorian at Orr Academy in Chicago’s Humboldt Park neighborhood has persevered despite incredible circumstances with neither parent being in the picture. Her dad has been incarcerated since she was 6. Her mother died last year.

“It was tough to be in school,” Williams said, wiping tears from her eyes. “Everything makes you the person you are.”

Despite her loss, Williams continued on with Posse Scholarship application interviews. That earned  Williams a full ride at Agnes Scott College, a private woman’s liberal arts college in Decatur, Georgia in the fall through the Posse Scholarship.

“She did the Posse Scholarship interviews and she lost her mom in the process,” Tabitha Younan, the school counselor at Orr who nominated Williams for the four-year scholarship.

Williams said the Posse Scholarship process was a long one, going through multiple rounds of interviews.

Living with her father’s girlfriend because she has no other family in the area, Williams said she has relied on Orr peers and faculty to be her family.

“Orr has definitely been an important part of my life,” Williams said.

A multisport athlete at the school, Williams said a mandated study hall for athletes was a way she made sure that she got her homework assignments done.

“We would all do a study hall before sports. That was helpful,” Williams said.

One of the happiest places for the Orr valedictorian is the basketball court, where she was one of the Orr squad’s leaders. 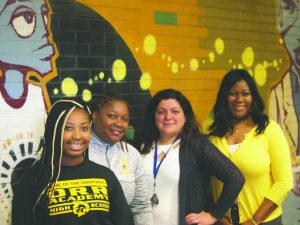 “I am a role model for people,” Williams said.

“She was an exemplary leader,” Robinson said. “The girls looked up to her. Javionna was a great resource. I loved the ways she would show her leadership.”

Originally from the city’s Englewood neighborhood, Williams said she wants to create a facility in that neighborhood to help the homeless. She moved to the Humboldt Park area two years before starting high school.

She also wants to become a lawyer to get her dad out of prison.

“I would like to help with that,” she said.

Williams said being without her father while she grew up was a struggle.

“It was difficult. I did not have a father figure growing up,” Williams said. “I didn’t wallow in it. I would do things and keep busy. I didn’t get caught up in it. All you can do is work to improve things … I want to be successful.”

Williams sees herself working for a law firm and establishing businesses to help people.

She said she doesn’t feel any added pressure leaving Orr as its No. 1 student in the Class of 2019. Williams said she would tackle challenges as they come along. 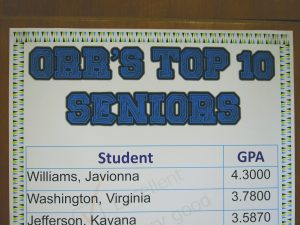 Orr principal Shanele Andrews said Williams is an individual who will make a difference in the world.

“She is definitely a leader,” Andrews said. “She is obviously going to make an impact in her life.”