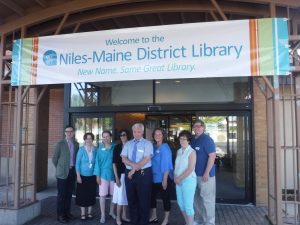 It isn’t often that a library changes its name.

But the Niles Public Library, which serves the village of Niles and many unincorporated areas nearby, did just that.

On July 1, it officially changed its name to Niles-Maine District Library. The staff hopes that the name would alert residents of unincorporated Maine Township that the library serves them, too.

But the effort isn’t without its challenges. While the library serves most of unincorporated Maine Township, it has areas that don’t get any library service whatsoever — and there is no way for residents to know which one they’re in unless they consult the official library district map. The Niles-Maine library is planning to do more outreach in those areas to make up for the deficiency. And in the long run, the library may look into bringing the library-less areas into the district — though library officials emphasized that it won’t happen any time soon.

In suburban Cook County, the libraries are generally divided into two categories. The municipal libraries are part of a city or a village where they reside. The district libraries, on the other hand, are completely independent government entities those borders may not correspond to a particular municipality.

The Niles-Maine District Library falls into the latter category. Founded in 1955, it includes the entire village of Niles, most of unincorporated Maine Township and a small, triangle-like portion of unincorporated Northfield Township formed by Dearlove Road, Milwaukee Avenue and Central Road.

According to the Niles Historical Society’s Niles Centennial History book, the library district was originally entirely within Niles borders. But the village expanded rapidly in the mid-20th century, and because the library was an independent entity, the new areas weren’t automatically added to the district. It had to annex the areas on its own.

The annexation was done through referenda. According to library director Susan Lempke, while most unincorporated parts of Maine Township voted to join, some didn’t. As the result, there are now four unincorporated residential areas aren’t part of the library district.

Meanwhile, outside of the aforementioned triangle-like area, most of unincorporated Northfield Township doesn’t have any library service, either.

Those areas don’t have to pay the library share of the property tax. But because they are not part of any library district whatsoever, they have to pay a fee if they want to get a card at any nearby library. Niles and Morton Grove libraries calculate their fees based on property tax revenue and local population, charging $261 and $126, respectively.

While Lempke said that, in the long term, she would like to address the unserved areas, at the moment, the library is focused on getting more patrons from the unincorporated areas that do fall within the district.

“A lot of our district lies outside Niles, and they don’t even know we’re their library,” Lempke said. “We’re the library they pay taxes to, so they they should come and get library cards.”

The library board of trustees voted to change the name during its Feb. 15 meeting, but the change didn’t take effect until July 1 — the beginning of the library’s 2017-18 fiscal year.

The board toyed with the idea of creating a brand-new logo to mark the occasion, but it ultimately only made a few minor tweaks.

To mark the change over to the new name, the library held a small opening ceremony on July 1, right before the library opened. Niles mayor Andew Przybylo and Niles Village Manager Steve Vinezeano were in attendance, as was the library board.

Lempke made a brief speech, emphasizing that the library has changed in many ways over the past 62 years, but one thing has always remained the same.

“It was never about the building — it was about our community,” she said, emphasizing that it is still true even with the new name.

The library staff is also working with local school districts, as well as area nursing homes, to get the word out, said Sasha Vasilic, the library’s public relations and marketing supervisor. He also explained that the library’s 2017-18 Strategic Plan, which was approved April 19, called for more community outreach, and reaching out to unincorporated areas will be a big part of it. “We’ve been partnering with the Golf Maine Park District,” he said.

An idea that has been occasionally discussed is reviving the branch library. For most of its history, the library district had two branches — the main branch near the village hall and a branch serving the areas further northwest. The branch site went through several different locations over the decades, but it closed for good in 1987 to cut costs.

During the July 19 meeting, the board approved a plan calling for the library to gather population data about unincorporated areas, study whether the bus routes serving the district do a good job of getting everyone to the library and create a task force that would look into the branch issue. Lempke emphasized that the end goal wouldn’t necessarily be a new branch, and that service in the northwest areas could potentially be expanded in other ways.