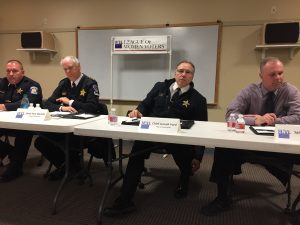 Small-town police departments in west Cook County cooperate to share expertise and manpower, but they are challenged by serious crime leaking from poverty-stricken areas, four police officials said at a Jan. 26 forum.

“This job is a lot harder than it was 32 years ago,” said Joseph Ford, police chief for the City of Countryside. The League of Women Voters of the La Grange Area sponsored the forum at the LaGrange Park Library.

Panelists agreed that some of the state’s new laws were “unfunded mandates” that required new training or suggested equipment, but did not provide a way to pay for it.

“We’d have to hire a civilian just to keep track of the [Freedom of Information Requests] for video,” Weitzel said.

The state passed new laws that police body cameras must be kept on when officers are on duty, but could be turned off when talking to a confidential informant, witness or victim. Officers are required to announce the camera when they enter a home and departments must keep videos for 90 days.

Riverside did a test run with two body cameras, but equipping the force was cost prohibitive, Weitzel said. Ironically, police squad car cameras can actually have a negative effect in investigations when they don’t work, he said.

“If the camera isn’t working, judges will throw out DUI [cases],” Weitzel said.

LaGrange Park Chief Ed Rompa said of thousands of arrests, the department had only a handful of complaints for excessive force. He credited the local village board and citizens for supporting officer training.

“We hold our officers to a high standard, camera or not.”

All four officials said their departments were scheduling officers to participate in the new crisis intervention curriculum created by the Law Enforcement Training and Standards Board. The training teaches de-escalation techniques and police responses to mental illness. Again, they said the state required participation, but didn’t provide funds to pay for it.

Well-being checks for mental health are becoming a more common service call, Weitzel said. A confrontation with a mentally ill citizen “can escalate into a combative situation.” Police might take someone to the emergency room, but that wasn’t really getting the help they needed, he said. Officials agreed there was not enough follow-up mental health support in the community.

Sharing resources was a theme. When serious crimes — such as homicide — occur in a village, the relationship between chiefs let them share detectives with special training.

“I know I can call [LaGrange Park Chief] Ed at two in the morning and he’ll pick up the phone,” said Weitzel. Weitzel chairs the West Suburban Directed Gang Enforcement (WEDGE) that follows gang activity in the near-west suburbs of Riverside, North Riverside, Brookfield, Lyons, Berwyn, Stickney, Forest Park, Oak Park and River Forest. Departments can count on mutual aid from members of the West Suburban Cook Police and Fire Project or specialized investigators from the South Suburban Major Crimes Task Force, they said. A detective on the force who gets special homicide training can be shared among departments in special cases.

The officials agreed that most crime in their middle-class villages were crimes of opportunity that could be thwarted by citizens who locked their doors and didn’t leave keys in the car.

But sometimes a serious crime or a life-or-death emergency ends up in their towns, they said.

Countryside was one of the first departments where officers were trained to carry Naxalone anti-overdose drugs, Ford said. With fentanyl opioids stronger than heroin, officers sometimes have to inject more than one dose, he said.

Traffic stops and domestic calls are some of the most dangerous service calls his patrol officers encounter, said Rompa. “You don’t know who is in that vehicle,” he said of traffic stops. In domestic disputes, “We have to be the referee and go in there and tell [conflicting parties] to play nice.”

In the U.S., 64 officer-ambush shootings took place in 2016, Rompa said. That has an effect on department morale. Rompa said citizens of LaGrange Park were supportive and encouraging to his officers at a recent National Night Out event. “That meant a lot to us.”

Weitzel pointed out his village is less than two miles from Chicago’s most violent West Side neighborhoods. Sometimes Riverside police encounter crime that bleeds from Chicago. All four officials agreed that the Chicago Police Department’s reputation was giving suburban cops a bad name.

“The police can’t solve poverty or lack of education or bad parenting in crime-ridden neighborhoods,” he said.

Nevertheless, in spite of some negative images of police in the media, the officials said they had many qualified candidates when they post a job opening on the force.