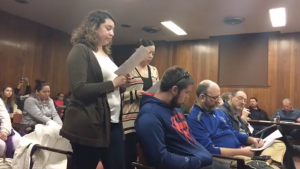 A woman testifies at the May 1 Village of Summit board meeting in favor of a welcoming ordinance. The board passed the new law. (Arab American Action Network Facebook)

When the Department of Homeland Security Immigration and Customs Enforcement (ICE) agents showed up in the Village of Summit recently, they were looking for one person, said Mayor Sergio Rodriguez.

But the effect was a wave of fear throughout the town (Population 11,000) where 1-in-3 residents was designated as “foreign born” in the 2016 U.S. Census. The town has an ethnic mix of immigrants of Polish, Albanian, Arabic and Latino descent, as well as an African-American population.

“I heard about a welcoming ordinance passed by the Village of Oak Park, and I thought, ‘this is interesting,’ so I asked the village attorney to look into it,” Rodriguez said.

Suburban Cook County towns are taking a look at welcoming ordinances or resolutions that keep local police departments and village personnel from collaborating with ICE agents in immigration raids, unless the federal agents have a criminal warrant.

The Illinois Senate also passed a state Trust Act bill May 4. If it becomes law, the act will draw a clear line for local law enforcement’s participation in ICE activities, forbidding local police resources from being used in ICE roundups or raids that are based on immigration status.

After the visits from ICE, residents told Rodriguez they were afraid to go to the grocery store or eat out, he said. Rodriguez attended an immigrant Know Your Rights workshop in neighboring Cicero and then arranged to hold two in Summit, in the basement of St. Blasé Catholic Church, where tri-lingual services are held in English, Spanish and Polish.

“The church was a safe space where people felt more comfortable than at Village Hall,” he said. A resident who volunteered in a third-grade classroom told the mayor she had observed students fearful and crying at the thought that their parents might be deported. She also witnessed bullying in the schools where Latino students were “taunted with threats of deportation,” she said.

Chicago-based Mujeres Latinas en Accion got involved because they have a site in nearby North Riverside, said Alessandra Stevens, associate director of policy and governmental affairs. Since the election, Mujeres Latinas already has seen a drop in women willing to report cases of abuse or domestic violence, Stevens said.

“They want the violence to stop, but they are too afraid to go to court for any official purpose,” she said. A month ago, in Texas, ICE detained a woman when she showed up at domestic violence court. 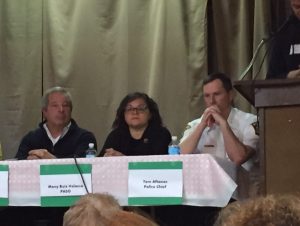 The Oak Park ordinance, created with the help of resident Mony Velasco Ruiz, executive director of PASO (West Suburban Action Project). Once the Oak Park legal team had approved the ordinance, other towns reached out to acquire a copy for their own use.

“Nothing makes us happier than being copied,” said Oak Park Mayor Anan Abu-Taleb. “And if there’s anything we can learn from others to do better for our residents, we want to know about it.”

Summit passed the ordinance May 1.

Meanwhile, at the same time, in the Village of Forest Park, Mayor Anthony Calderone and Police Chief Thomas Aftanas joined a panel at the Eagles Hall building for a Welcoming Resolution town hall.

Aftanas assured the group, “The Forest Park Police do not cooperate with ICE and we never ask anyone their immigration status.” Ruiz-Velasco answered questions and the mayor announced to cheers that the town was on its way to a welcoming resolution.

Abudayyeh said in this case the welcoming ordinance trend is being led by elected officials now, instead of demanded by community organizers.

“The fact that the village of Summit took upon itself to reach out for information, that’s a positive development for sure,” he said. “Now we just have to get out the maps and see where else we have connections, where other towns might want to do this.”