Special Olympics Illinois kicked off its 2018 Plunge season on Feb. 16 with more than 50 SUPER Plunge registrants taking a dip into icy Lake Michigan once an hour for 24 hours at Clark Street Beach near Northwestern University.

“It compares to nothing else,” said Dan McIntyre, a Woodridge police officer and seven-time plunger.

“The energy when we jump into the water, it compares to nothing else because we’re all here as volunteers.

“And to jump into that,” McIntyre said, pointing to a monitored section of the beach where plungers took their dips, “If you think about it, 24 times, you have to be either insane or really attached to a cause that you’re doing it for.” 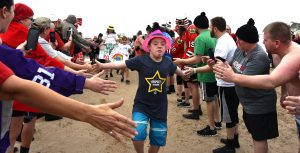 In pink hat, Jack Klawitter, 12, a sixth-grader from Frankfort, is about to enter Lake Michigan with Tommy Hawk, the Chicago Blackhawks mascot, ending the plunge line in the back of the queue. (Photo by Karie Angell Luc/for Chronicle Media)

All proceeds benefit the 23,000 athletes and 20,000 young athletes of Special Olympics Illinois. The SUPER Plunge this year alone raised approximately $200,000.

The air temperature was reporting at 24 degrees on Saturday morning (Feb. 17). SUPER Plunger Bailey Barch of Normal said of each plunge, “It was very cold. Every time.” 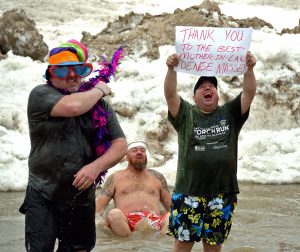 Holding up a sign to thank his mother-in-law for her sizable donation, Stephen Kretschmer of Bloomington is in icy Lake Michigan. “Without her donation,” Kretschmer said of his mother-in-law, “I don’t know where I would have been. I love you, Dee.” Kretschmer raised an estimated $4,000. (Photo by Karie Angell Luc/for Chronicle Media)

Jack Klawitter, 12, a sixth-grader from Frankfort, participated with his parents Dave and Brook Klawitter.

“Our son Jack has Down syndrome and we’ve been doing this for eight years,” Dave Klawitter said.

“It’s raising dough,” Klawitter added, of one purpose of the event.

Saturday’s 9 a.m. plunge featured plungers donning crazy hats. On Friday, there was a friends and family plunge opportunity, and on Saturday at 10 a.m., the “Blackhawks Plunge Hour” where registrants could accompany SUPER Plungers.

The extra registrants rounded out plunger participation to an estimated 80 people over the 24 hours. 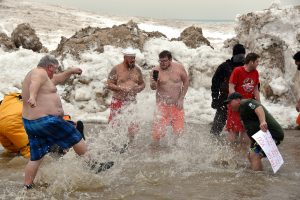 Getting his kicks in wearing blue shorts, Dennis Reilly, an officer with the Tinley Park Police, ribs his fellow plungers with ice water. And sand. (Photo by Karie Angell Luc/for Chronicle Media)

“It’s as cold as it can be without being frozen,” said plunger Mary Pocuis of Glendale Heights.

This is the 19th year of the Law Enforcement Torch Run Polar Plunge. More than 66,000 plungers have raised more than $18.4 million.

For Stephen Kretschmer of Bloomington doing the plunge sent a personal message.

“The athletes respect us so much, it’s the least we can do for them,” said Kretschmer, who works at Logan Correctional Center.

During one plunge, Kretschmer held up a sign to thank his mother-in-law for her sizable donation.

“Without her donation,” Kretschmer said, “I don’t know where I would have been.”

Kretschmer said he raised an estimated $4,000. He had a shout out to his mother-in-law. 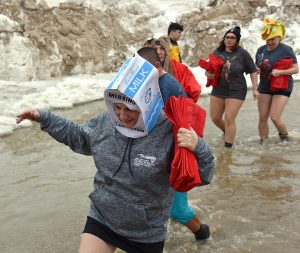 Got milk? How about some ice water? During the 9 a.m. plunge featuring creative, crazy hats, Mary Pocuis of Glendale Heights has milk on her mind. (Photo by Karie Angell Luc/for Chronicle Media)

“I love you, Dee.” Kretschmer said.

For more information, to register, or to support a plunger, visit www.plungeillinois.com.

—- Taking the plunge for Special Olympics —