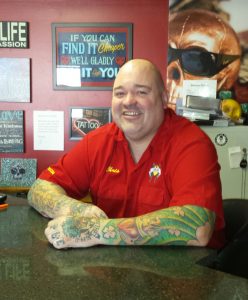 Oswego tattoo artist Chris Baker poses for a portrait at his shop, INK180, which is holding a promotion on semicolon tattoos throughout the month of August. The tattoos are Baker’s attempt at raising awareness of suicide, mental illness and addiction.(Photo by By Erika Wurst for Chronicle Media)

Of the 55 tattoos Oswego resident and tattoo artist Chris Baker has, it’s a small one etched on his left thumb that most people ask about.

It’s a simple design — an all black semi-colon that covers his skin and fills his heart.

“I love the symbolism of tattoos and for this to be so simple yet so powerful speaks volumes,” Baker said of the art.

Baker joins hundreds of area residents who have been moved by The Semicolon Project and are using the tattoos as a way to start a conversation about suicide, as well as to addiction and mental illness.

“We’re bringing awareness to a situation that’s really impacting our community,” Baker said. “It helps us move forward and not forget the people we have lost.”

The Semicolon Project is a movement with a simple meaning, supporters said. According to the movement’s website, the semicolon stands for the spot in a sentence where the author could have stopped but paused instead and kept on going.

By tattooing the symbol on themselves, supporters say it’s a way to start conversations about often taboo topics like suicide.

Baker said he got his tattoo in memory of his friend Scott, who committed suicide several years ago after becoming ill.

At his Oswego tattoo shop, INK180, Baker keeps a picture of his friend hanging above his work station. He said the tattoo and Scott’s picture are two ways of remembering his friend and keeping the topic of suicide on the forefront.

To further his outreach, last fall Baker hosted a promotion at his shop offering several semicolon designs for $25. The response was overwhelming to say the least, he said. Over a three-day period, hundreds of people got the tattooed symbols at Baker’s discounted price.

So when this fall rolled around and the request for semicolons came rolling in, Baker thought he’d offer the deal once more. He and his partner artist kicked off the promotion on Aug. 13 and did 91 semicolon tattoos on that day alone.  He said this is proof that The Semicolon Project is a movement and not a trend. 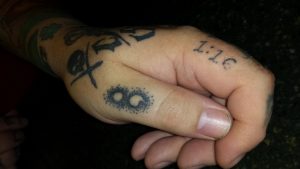 Of the 55 tattoos Oswego resident and tattoo artist Chris Baker has, it’s a small semicolon etched on his left thumb that most people ask about. Baker said he got the tattoo to raise awareness about suicide after the death of his friend Scott. (Photo by By Erika Wurst
for Chronicle Media)

“I think it’s even more popular this year than it was in the past,” he said.

Although the shop didn’t open until 10 a.m. on the first day of this year’s promotion, when Baker arrived at 8:30 a.m. to clean there was a line of seven people outside. He said a steady stream continued in throughout the day.

The mix of folks was varied. There were suicide survivors, and family members of loved ones lost. There were those dealing with self-injury and self-hatred; others honoring lost parents, siblings and friends.

“Everybody is talking amongst each other and sharing stories. It’s kind of like a big counseling session,” Baker said about the shop’s atmosphere.

And with semicolon designs ranging from between $25 and $60 (Baker’s minimum sessions usually cost $75), the promotion gave even those who normally couldn’t afford it a chance to sit in Baker’s chair. 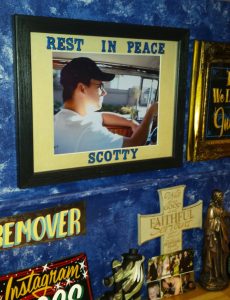 Chris Baker’s work station at his Oswego tattoo shop INK180 sits a picture of his friend Scott who committed suicide several years ago. The picture, as well as Baker’s semicolon tattoo, help keep his friend’s memory alive, he said. (Photo by By Erika Wurst
for Chronicle Media)

“We’ve had a lot of people say that they’ve wanted to get a semicolon tattoo for a while but they don’t have the money, or they’re students. So, we’re giving the people what they want,” Baker said. “At the basis of what we are is a ministry. We’re never going to tattoo to get rich. We’re going to tattoo to make a difference in the community.”