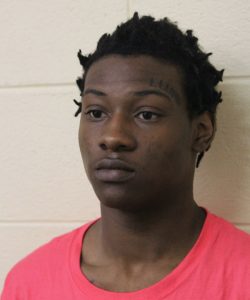 An unrelated police pursuit led to a Chicago teen being charged in connection with a Chicago Heights murder.

Michael Caraway, 18, a resident of the 2900 block of South State Street, has been charged with first-degree murder in connection with the February death of a 23-year-old Chicago Heights man.

Caraway was charged April 24 after Illinois State Police apprehended him in Calumet City following a vehicle pursuit on an unrelated matter.

The Chicago teen is charged with the Feb. 29 murder of Donta Scruggs in Chicago Heights. Chicago Heights police received a call at 9:39 a.m. that day of shots fired at 408 Normal Ave. Officers discovered Scruggs with gunshot wounds to his body. Scruggs died that evening at Stroger Hospital in Chicago.

At the time, police said Scruggs’ shooting did not seem to be a random act.

Illinois State Police troopers were called to assist Chicago police in a vehicle pursuit on the southbound Dan Ryan expressway at 12:56 a.m. April 24. State Police units became involved in the pursuit on southbound Interstate 94 near 75th Street. The pursuit ended after the vehicle exited the Dan Ryan on eastbound Sibley Boulevard and crashed about a block east of the Interstate 94 interchange in Calumet City.

Immediately after the crash, the driver of the vehicle, identified as Caraway, fled the scene on foot. State Police troopers said they apprehended Caraway a short time later. After his apprehension, Caraway was transported to the Calumet City Police Department where Chicago Heights detectives questioned him as a suspect in the Feb. 29 homicide.

State Police knew that Caraway was wanted for questioning on multiple Chicago Heights police investigations, along with the murder case, Chicago Heights Chief Thomas Rogers said. He said the Cook County State’s Attorney’s Office reviewed the facts in the case and approved one count of first-degree murder against Caraway.

Caraway was being held without bond in Cook County Jail.

In connection with the State Police pursuit, Caraway was charged with armed violence, aggravate fleeing and eluding, defacement of a firearm, and two counts of aggravated unlawful use of a weapon. State Police said two loaded firearms were found in Caraway’s vehicle.