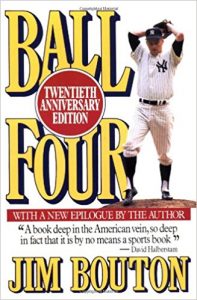 One was about Mickey Mantle. The other was about orange juice.

You may know the first story. It probably made “Ball Four” a best-seller. It revealed that it was Previte, not Mantle, who signed thousands of baseballs that were sold as autographed by the three-time Most Valuable Player. Bouton said Mantle was the only Yankee who refused to do his own signing.

That’s not the story that interests me, even though it may say a lot about life in these United States. I think the other story says even more.

Along with autograph forgery, Previte was in charge of clubhouse beverages. Every time players got something to drink, Previte seemed to be watching to make sure they “mark it up,” so they could be charged for each cup at the end of the season.

“And he’d never have enough orange juice, although that’s what everybody wanted most,” wrote Bouton. “One time I asked him, ‘Pete, how come you’re always out of orange juice?’ And he said, ‘If I get it, you guys just drink it up.’”

This is the kind of answer that makes you worry that your head will explode.

It also tells us two things about Previte, at least Previte as described by Bouton.

One: It’s cool with him if the players drink Coke just to save him the trouble of refilling the juice, even if it makes them fat and slow. Two: He does not care what the players prefer. He will give them what he wants to give them.

Who thinks this way? It’s like Marshall Field came back from the dead, dropped acid, and pronounced, “Give the lady what she doesn’t want.”

Maybe he did, because Previte’s way of doing business, of course, is not confined to the New York Yankees clubhouse of the 1960s. It’s not rare. You will find The Pete Previte Syndrome everywhere.

It is in Detroit, where the Ford Motor Company has been making cars since 1903. That’s why people call it a car company. This spring, however, Ford announced that soon, it will not make cars.

This is not because making cars isn’t profitable. It is. It’s just not as profitable as making SUVs and trucks and such.

So soon, if any of you Ford fans want to buy a car (other than a Mustang, the lone model exempted from the Fordian death sentence), you are out of luck.

But I’m sure somebody will make you a nice deal for something else.

You may have to look around a bit, however. Other American car companies are also dropping some sedan lines in favor of more truckish products.

All of this may sound familiar. Around the time when Bouton’s book came out, some of the same companies dropped their smaller cars, and declined to tool up for new ones. This was very much appreciated in Japan.

Pete Previte works everywhere. You can see his handiwork in drug stores, where your favorite mouthwash, toothbrushes and pain-killers may have gone missing. In grocery stores, those lentil chips and mustard pretzels you like just weren’t good enough for Pete.

Years ago, tomatoes were hybridized to make them a uniform red color, as well as nice and hard to protect them from any squishing in transit. As you know, these sturdy, colorful tomatoes do not taste good. Pete doesn’t care.

The conglomerate that bought Revlon in 2000 discontinued Milk Plus 6 shampoo a few years later, and was unmoved by the long lines of women buying up the last bottles.

Pete was at work there, too. Not only does he dislike being inconvenienced, and cares little for customer preferences, but he lacks appreciation for whatever was successful for the people who came before him.

Pete often prevails even when his plans seem sure to result in staggering losses.

You know that you can find Pete in Washington. That’s the town that, in 2010, cobbled together an imperfect but effective affordable health care program that insured 20 million Americans. Eight years later, Pete has reformed it so that it’s a lot less affordable for many of those who need the insurance. But the new plan is more attractive to people who don’t need to scramble for health care. Now, the ACA costs $33 billion more per year while serving about 7 million fewer people.

Pete has been very busy in the last year or so, getting rid of new national park land, affordable solar panels, air pollution protections, and waterway anti-dumping regulations.

Pete knows that it’s no use to provide clean, safe water to people in Flint, Mich., or anywhere else.

If he does, you guys just drink it up.

—– The Pete Previte Syndrome: The customer is always wrong  —-