When someone larger than life dies, it can be a surreal experience. When that person is someone you knew and liked and respected, it is all the more profound and unreal.

Val Camilletti was The Queen of Music in Oak Park and well beyond, her iconic Val’s halla Records store, her humble hall, her throne a space behind a counter. In the wake of her recent death, she has been memorialized by numerous people, including WXRT’s Terri Hemmert, her dear friend, and veteran ’XRT DJ Lin Brehmer. 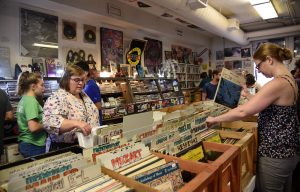 Some people are described as “pillars” of the community. Val was more like the ground upon which all those pillars rested. She was, quite simply, I feel, one of the most authentic people I’ve ever known.

I don’t mean that badly regarding anyone else. It’s just that Val was truly herself in a way I’ve seen few other pull off, not that she was trying to pull off anything. She was who she was, a humble West Side Chicago girl who lived her life according to her own values, and did not compromise. Someone who considered herself blessed to have escaped the staid world of a bank employee and found a vibrant world totally aligned with her soul.

Behind her apparent simplicity and humility was a vast and wondrous inner universe. And you were a lucky person indeed if you ever got to share that inner universe with her.

I was planning to drop in to Val’s halla the first week of July after returning from vacation. But I didn’t, because, as my excuse goes, one thing piled up on another, and I was just too busy. So I missed my opportunity to see her one last time.

That will remain my much regretted loss. 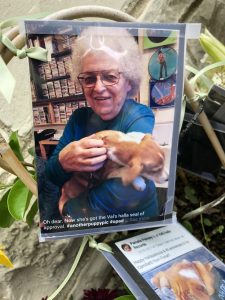 I reported on Val four or five times over the years, including a column I wrote in 2006, after, as she put it, “the specter of redevelopment reared its head,” and she was forced out of the building she’d called home for 34 years. (It was, I recall, a redevelopment that sat empty for some three years).

I wrote about Val and a host of friends and customers saying goodbye to that iconic store front on South Boulevard by Oak Park Avenue — a joint so small its address was 723 1/2 South Boulevard — with a combination sale/street party.

I wrote that Val “didn’t do anything more than simply pursue (her) interests and earn a living. But along the way (she) created something special that countless people have enjoyed, and for which (she) deserves our thanks.”

“If ever there was living proof of the good things ordinary people can wrought in life, Val is it. She never held high office or earned an advanced degree. But she did what she chose for her life’s work well, with passion and concern and care about her product.

“She’s a classic example of how simply doing what you love can have a positive impact on things.”

When I first visited Val’s in 1972, the summer before I entered the Navy, I had no idea it would be the beginning of a 45-year history with her. That the somewhat loud, and sometimes brusque woman behind the record counter, seemingly always inspecting a stack of records for possible placement on the turntable, would become so very special as the years wore on.

The Elvis memorial — that is, a toilet in a tiny closet. The posters on the walls and ceiling that captured the various eras of rock ’n’ roll and other music. Anyone remember WDAI? FM 94.7?

And the music. Always the music playing on the store speakers. Music you immediately recognized, and music you’d never heard before, so you asked her about it. 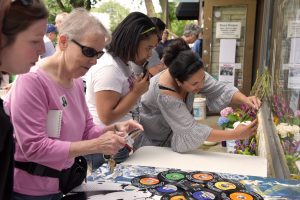 That, of course, led to conversations, some just a minute or two, others that lasted over half an hour, all inevitably ended by the demands of paying customers, in which she talked about everything from the British Invasion to punk, folk to opera and Broadway and country and Zydeco and some arcane genre you really didn’t quite grasp. She spoke of it all with such a (vaguely) intimidating command that it made you hesitate to interrupt because it was so clear she knew more about it ALL than you could ever hope to learn.

Because she loved it all. Loved music with a joy and openness and pleasure that was a wonder to observe.

For the past 12 years Val operated out of a less charming, but more accessible store front on Harrison Street. No matter, since it was Val who people came to see as much as the records. And as anyone who knew her wasn’t surprised to see, she made a major impact in her new neighborhood.

It’s a forgivable journalistic offense to give into the temptation to traffic in vinyl record references when talking about Val, her being such a staunch proponent of analog recording on vinyl.

The year before she was forced out of her South Boulevard location, Val celebrated her 33rd anniversary with a happy nod to that classic vinyl record speed, with an old school combination record sale/street party. 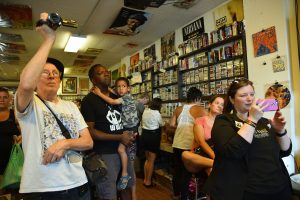 Last year Val’s halla celebrated its 45th year, like in, you know, the classic 45 rpm record.

And Val sadly (but appropriately perhaps?) died at 78 years of age, 78 rpms, as one writer noted, being an old time rpm standard.

Me? I wish it was somehow still 33 rpms into Val’s wondrous reign as the Queen of Music in Oak Park, and that I could still see that smiling face and that head of Angela Davis-inspired gray woolly hair, and be able to listen as she talked too long about what she so loved.

Don McClean wrote of “the day the music died.” Of course, so long as humans seek to express the joys and longings of their souls, music can never die.

But for the moment, it sure feels like it has.