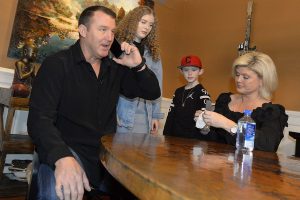 Jim Thome, with family, gets a call from Baseball Writers Association of America informing him of his selection to Hall of Fame on Wednesday. (Photo courtesy of the Chicago White Sox)

Jim Thome absolutely adored his hometown of Peoria, where a close-knit, sports-minded family favoring the Chicago Cubs produced a Hall of Famer with 612 career homers.

“I love Peoria. It’s where it all started,” Thome said early on the evening of Jan. 24, upon hearing of his election to baseball’s Hall of Fame.

And it truly started when Cardinals fan brother Randy Thome, once called the “black sheep” of the family due to his Redbirds leaning, converted kindergarten-age Jim to a left-handed hitter. Of course the Thomes would tinker with one of their own. Several were avid softball players, driving an hour-plus to tournaments in the Quad Cities in the late afternoon after putting in a full day of work close to home.

“At 5 or 6, I know (Randy) switched me around,” Thome said during a teleconference. “I’m glad that he did that. It’s something personally I will never forget.

Although Thome in his baseball travels went far from home — as far as Los Angeles, Philadelphia and Baltimore — he has settled a few hours’ drive from his kinfolk to continue his baseball career in his second stint with the White Sox. Living in a Chicago southwest suburb with easy access to his hunting lodge west of Peoria, Thome now is a special assistant with the AL team for which he spent the better part of four eventful seasons from 2006 to 2009.

“It was very special,” he said of his Sox seasons, coming over from Philadelphia in a late 2005 trade for center fielder Aaron Rowand.

“That point of my career — when I left Philly and after Mom (Joyce Thome) passed away — it brought a lot of happiness to my family. It was a fun, fun four years of excitement.  It’s the great thing baseball does.”

The Sox did not soon forget Thome’s character, hard work (100 swings in the indoor cage during games while a DH) or clutch hitting. He slugged a booming homer to center to help John Danks beat the Minnesota Twins 1-0 in the famous “blackout game” at Guaranteed Rate Field to clinch the Sox’s last playoff berth in 2008.

As soon as Thome retired after the 2012 season, the Sox brought him back into the front office.

“I love (chairman) Jerry Reinsdorf, I love (general manager) Rick Hahn. They taught me so much in (the executive and scouting) area of the game. Being on the other side, I see both sides. I love the fans, I love the White Sox organization and they’ve always treated me with the utmost respect. It starts at the top with Jerry Reinsdorf.”

Thome already is a fan of the Hall of Fame. He has taken father Chuck Thome to Cooperstown.  Now he’s on the inside looking out.

“There were so many, many things,” he said in a teleconference about the Hall’s top attractions. “Walking through the front doors gives you chills enough. Going into the basement and putting on the white gloves and touching Babe Ruth’s items … and Lou Gehrig’s. The Hall of Fame is so magical. It’s the greatest place there is. One day doesn’t do it justice. You need to spend two or three to truly understand the great things in their place. It’s truly special.”

All-time glory comes from modest roots. Freshly switched to the lefty side of the plate when he was 8, Thome rooted for strongman Dave Kingman in the late 1970s. He ended up far exceeding the strikeout-prone Kingman (442 homers) in production and character.

“We played with the tennis ball against the brick building,” Thome once said. “I liked the way Kingman hit the ball out of the ballpark.  Dave Kingman was one of those guys who was all or nothing. My dad loved him. I had this obsession with Kingman.”

When parents Chuck and Joyce Thome drove their son to see a game at Wrigley Field, they passed by Belmont Harbor. The younger Thome eagerly looked out the window at the mass of boats. He heard Kingman had a boat. What he did not know was Kingman went out fishing so early in the morning he had to nap in Tony Garofalo’s tiny trainer’s room at Wrigley Field to be wakeful for the 1:30 p.m. game start.

Once at the ballpark, the Thomes suddenly lost track of their son. Suddenly, a big, burly Cub retrieved him. He had snuck into the dugout in search of Kingman.

“Barry Foote ended up carrying me out,” he said. “It was a great story. It was like any kid — when they have a player they admire, they’ll do anything to get their favorite players’ autograph. That’s how I was.”

Thome was a wrong-field hitting shortstop coming out of Limestone High School in Bartonville, a Peoria suburb. The Cubs thirsted for home-grown power, but passed over Thome in the 1989 draft. Their top pick that year was burly high-school slugger Earl Cunningham, who struck out once for every 2½ at-bats for the Peoria Chiefs Class A farm club. Cunningham washed out of baseball at about the time Thome, an unheralded 13th-round pick of the Cleveland Indians, really got going.

“I would not be here if not for Charlie,” he said. “There were many, many days where he pounded his fists wanting to keep me in the big-league level. In Triple-A told me I was not ready for the majors. We had this bond together that was very special. He gave it time and he gave it passion. He gave his life to the game of baseball. I was the one who reaped the rewards. When I wasn’t (with the Indians anymore), he was the guy who I could go and call, and ease your mind as a friend and an ambassador.”

Wherever he went in baseball, Thome won friends and influenced people. All the while, he had tremendous respect for those who came before him.

After the Sox, he moved on to the AL Central archrival Twins. There, he met Hall of Famer Harmon Killebrew, since deceased.

“I never met a finer man than Harmon,” he said. “I feel so lucky I got to cross paths. He would come to spring training and he was this surreal, iconic figure. I caught myself many times staring at him. Charlie Manuel also played in Minnesota. He said Harmon hit these high popups that just kept going and going. I’d do that and he’d say that’s like Harmon.”

Few are like Thome in giving back post-career. He has instructed youth players at the Bulls/Sox Academy in west suburban Lisle. And he could not forget Randy Thome lived in Washington, outside Peoria, when it was ravaged by an autumn tornado in 2013. Thome’s home was not hit, but without blinking, Thome donated $100,000 to relief efforts for the stricken city.

Not everyone inducted into Cooperstown is a saint. Some were sinners. In the latest class, the Hall of Fame got the ultimate good-character man.

—Thome gets call to Hall of Fame–