Under a blue-sky day with temperatures approaching the lower 60s, The Les Turner ALS Foundation for the ALS Walk for Life at Soldier Field in Chicago Sept. 29 drew approximately 7,000 attendees. 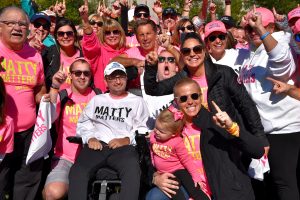 Since its inception in 2002, the ALS Walk for Life has raised millions for the Chicagoland ALS community. For 2018, approximately $650,000 was expected to be raised.

Amyotrophic lateral sclerosis (ALS) is a rapidly progressive neuromuscular disease that attacks a person’s muscles, impacting their ability to walk, speak, eat and breathe, yet typically keeping their mind intact.

“We walk for health, we walk for hope and we walk for life,” said Andrea Pauls Backman of Glenview, CEO of the Les Turner ALS Foundation of Skokie.

People could walk the two-mile course. 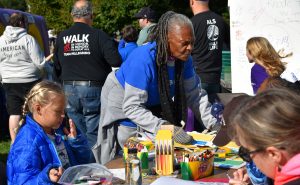 “People with ALS struggle to get through every day,” Pauls Backman said.

“They come here today with their families and they’re surrounded by other people, all of whom understand the struggle they’re going through.

“It’s a big family reunion and we’re here to support every single one of them,” Pauls Backman said.

Matt Beuke, 28, of Hinsdale, had a fundraising team, which featured hot pink shirts and a message on back, “KICK ALS in the ASS.”

“Matty Matters!” is what Beuke’s group chanted for a photo op before walking. 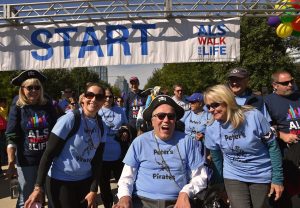 In its 17th annual year, besides fellowship, The ALS Walk for Life offers patients and families encouragement to access learning about research and other services. Educational activities are included plus children’s activities.

“I’m just hoping the take-away today is just celebration, celebration of hope, of life, and that there’s a cure down the road,” said ALS patient Matt Toole of Elmhurst who was diagnosed nearly 10 years ago.

He and his wife Karen Toole have two children, Regan, 16, a junior at York Community High School and Paddy, 15, a sophomore.

“He makes me so proud, I cry,” said Karen Toole, about her husband.

“We live every day to its fullest, we have two wonderful kids, we love Les Turner, it’s been a wonderful place for us, so many wonderful resources, great people,” Karen Toole said. 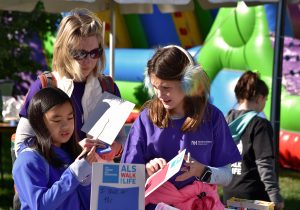 Jaclyn Lauderback (right) of Naperville is at the children’s craft table with her daughter Chloe Lauderback, 10, a fifth-grader. (Photo by Karie Angell Luc/for Chronicle Media)

“He makes us all just feel stronger,” Regan said about Matt Toole.

Supporters raise funds for the Les Turner ALS Foundation and are provided with tools to help guide them in their efforts to do their part to find a cure. 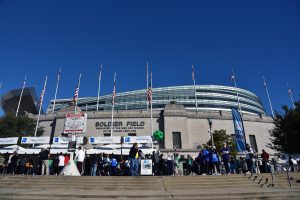 “You know, they say the average survival rate is two to five years after diagnosis, so I think I’m going to beat that by a large margin.

There is no event registration fee. Held rain or shine, the event opened at 9:30 a.m. with the walk commencing scheduled at 11 a.m.

The Les Turner ALS Foundation of Skokie was founded in 1977.

—- Thousands turn out for ALS Walk for Life at Soldier Field —-