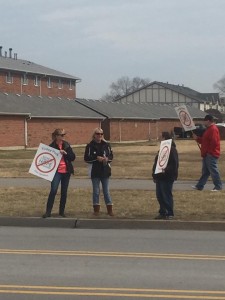 Nine residents of Tinley Park have sued the village for a procedural oversight that may delay an Ohio company’s plan to build a controversial affordable housing building in the village.

The suit asserts that the village planning department failed to properly publish a legal advertisement in the Daily Southtown for a plan commission meeting Sept. 3, 2015. This was the meeting at which a text amendment to the zoning code was changed from “commercial required” on the first floor of a building to “commercial permitted.”

The zoning tweak allowed Buckeye Hope Community Foundation to meet “precise compliance” with the village’s 2011 “Legacy Code” building standards. According to the code, this fast-tracked the project so it did not need village trustee approval.

Citizen uproar about the project, fueled by social media, has engaged citizens who “have been disenfranchised,” said Matt Coughlin, spokesman for citizens for Tinley Park. The group has raised more than $5,000 to pay legal bills for the lawsuit on an Internet fundraising site. “The average donation is $50,” Coughlin said.

The suit claims that the zoning change should be considered null-and-void since it was not listed as an agenda item on the Daily Southtown classified ad published on Aug. 14. The change was a tabled holdover item from an Aug. 20 Planning Board meeting that was properly advertised in the Southtown.

Village Manager David Niemeyer declined to be interviewed about the lawsuit, but Deputy Clerk Laura Godette confirmed the village posts classified ads in a newspaper “either 10 or 15 days before a meeting. We comply with the Open Meetings Act,” she said. The clerk’s office does not post zoning and planning department board notices, Godette said. “They do that themselves.”

This isn’t the only lawsuit on the village’s horizon. At a Feb. 2 village board meeting, David Petroni, Buckeye’s vice president of business development, implied the company might sue if there was “interference” because they had brought the project into “precise compliance” with the zoning code. “We have invested hundreds of thousands of dollars,” he said. The village plan commission tabled the project and seven of the nine members resigned shortly thereafter.

Village Trustee meetings since February have been moved to larger venues because of the number of citizens attending.

At the May 22 village board meeting, Coughlin criticized the current trustees and village staff, saying the current staff allowed conditions that “draw vapor shops, gambling cafes, pawn shops and furniture rental centers to our town,” he said. “For all you sitting here tonight, make no mistake, there is no plan.”

“Next election season starts right here right now,” Coughlin added, “Because if you can’t make the [changes] we need I wish you the best of luck in your next endeavor. There will be new leadership in town.”

A press release announcing the lawsuit said the group seeks transparency and accountability and opposes “long-standing traditions of pay-to-play politics and old-boy-network methods.”

Coughlin said the new citizen involvement is a reaction to a decades-long political tradition of the former mayor appointing trustees during the middle of a term. In 2015, a new slate of three trustees overturned longtime incumbents and Mayor Ed Zabrocki stepped down 30 days after the election, appointing 32-year trustee Seaman to the mayor’s position.

“Before 2015, no village trustee had been popularly elected by the citizens of Tinley Park without first being appointed by Zabrocki,” the group’s statement said.

Coughlin said he himself has no interest in serving as a trustee, since his work travel with a technology company doesn’t give him enough time.

“We are going to find good people who share the vision for this town,” Coughlin said.

At the March 22 board meeting, the village board of Tinley Park approved a plan to have the Cook County Sheriff’s Inspector General’s Office conduct an investigation of the village’s building and planning departments to see if staff members improperly planned with developers or withheld information to manipulate the village zoning code.

Allegations from one trustee and members of the so-called Citizens of Tinley Park group have led to the temporary paid suspension of Planning Director Amy Connelly. The village originally requested an investigation from the law firm Winston and Strawn, but the firm withdrew. The ordinance compels village officials and staff to cooperate with the sheriff’s investigators.

The Tinley Park board also tabled the creation of an office of “internal auditor” for the village. Citizen Ken Shaw criticized the ordinance as “flimsy” and inadequate to “give the assurance that citizens need.” He also suggested an audit committee with citizen participation.