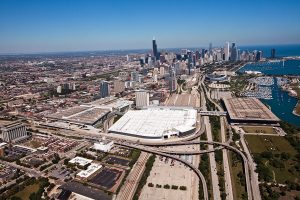 Local revenues that support McCormick Place have been plummeting again since Gov. J.B. Pritzker first issued a statewide stay-at-home order in March as state tourism has continued to suffer because of the ongoing pandemic. (Courtesy of the Metropolitan Pier and Exposition Authority)

SPRINGFIELD – A drastic drop in tourism and convention revenues in the Chicago area brought on by the COVID-19 pandemic could put the state on the hook for making bond payments on behalf of the operators of the McCormick Place convention center, according to the bond rating agency Moody’s Investor Services.

McCormick Place, which bills itself as the largest convention center in North America, is operated by a municipal corporation, the Metropolitan Pier and Exposition Authority, commonly known as Met Pier.

According to Moody’s, Met Pier has about $2.9 billion worth of outstanding bonds backed by various tourism-related taxes in Chicago and, as a backstop, Illinois state sales tax revenues, which are used whenever the local revenues are insufficient to make the bond payments. State sales tax revenue covers up to $300 million in debt service in such a situation when Met Pier’s pledged tax revenue falls short, according to Moody’s.

Officials at Met Pier said they are working on a debt refinancing package that they hope will make it unnecessary to draw on state funds. According to the state comptroller’s office, as of June 30, Met Pier had a total outstanding bonded indebtedness of just under $4.2 billion.

In an email statement, Met Pier’s chief financial officer Jason Bormann said the corporation has taken a number of steps to cut its operational costs this year. He also said Met Pier plans to refinance $118.4 million in bonds that mature during the current fiscal year.

“These bonds financed McCormick Place’s South and West Buildings, among other things,” Bormann said. “These facilities help drive tourism, economic activity and tax revenues to the state of Illinois and city of Chicago.”

But local revenues that support McCormick Place have been plummeting again since Gov. JB Pritzker first issued a statewide stay-at-home order in March. Although that order is no longer in effect, the convention center and state tourism have continued to suffer as allowable crowd size remains limited to 50 people. In August, the city reported revenues from those local taxes were down 85 percent compared to the same month a year ago.

“Met Pier’s weak August tax revenue marks another in a series of declines that began in April,” the Moody’s report stated. “Monthly collections for June through August were 78 percent below year-earlier levels on average. Met Pier’s convention center, McCormick Place, has suffered from a wave of cancellations because of the pandemic.”

Gina Speckman, executive director of the Chicago North Shore Convention and Visitors Bureau, said in an interview Tuesday that the loss of convention business at McCormick Place is being felt throughout the Chicago metropolitan area.

“In the Chicagoland area, a lot of our visitor traffic is business-related,” she said. “McCormick Place has one of the largest convention centers in the country and it basically has been shut down since the end of March. I think there’s been about 130 events that were taking place at McCormick Place that were canceled from March until next early next year. So that has had a tremendous impact on the city. And the suburban areas which are very heavily dependent on meetings and group business, you know, that is also not taking place.”

Speckman said that even if the pandemic were to disappear immediately, industry officials estimate that it could take at least until 2023 for travel and tourism business to return to pre-pandemic levels.

“And, you know, I don’t think that we’re going to get back to everything the way it was before,” she added. “Meetings are going to be more hybrid. People are going to want to have the Zoom options versus in-person options for meetings. And meetings are going to have to be able to accommodate that reality. The makeup of how meetings and conventions and conferences happen moving forward is going to look different.”