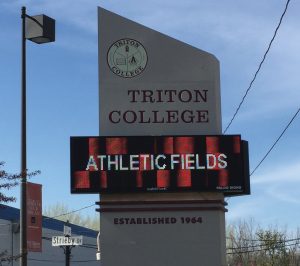 Triton College’s Diversity Committee has voiced concerns over the appointment of an internal candidate to a vice president position at the school without a national search being done. The committee says the appointment is part of a lack of diversity at the campus. (Chronicle Media file photo)

Despite more than half of Triton College’s student population being individuals of color, the college’s administration does not reflect anywhere near that same diversity, according to a school panel.

Members of the college’s Diversity Committee have sent a letter to the college’s president and board of trustees lamenting the fact that when the next school year begins only one of the school’s nine deans will be a person of color.

“Diversity is not just nice to have because of political correctness or because it’s an education buzzword,” Gail Krahenbuhl, co-chair of the college’s Diversity Committee told the Chronicle. “We believe it actually impacts student achievement. We see a connection between a lack of diversity in leadership and the achievement of students of color.”

She said black students at Triton College have the “shockingly low” graduation rate of 7%.

Krahenbuhl noted with the pending resignation of Dean of Admissions Amanda Turner at the end of this school year, Triton would have no black deans.

“In the last three years, we have lost three African-American deans,” Krahenbuhl said. “… We are concerned about the climate.”

Krahenbuhl said the appointment of Sue Campos from dean of health careers to vice president of academic affairs without faculty input or a national search being done raised some eyebrows.

The Triton Faculty Association raised concerns about Campos’ appointment back in January.

Joe Dusek, president of the Triton College Faculty Association, made a statement at the college’s Jan. 22 board of trustees meeting that faculty members were opposed to the “behind-the-scenes” appointment.

“We are bombarded with happy emails about all working together. This is the straw that broke the camel’s back,” Dusek said about the lack of a candidate search for the VP position. “It is almost like the administration is so brazen that they are not even going to bother with a phony baloney job search.”

“We, the members of the Diversity Committee (formerly the Presidential Advisory Committee) wish that you solicited our advice before you made the decision to elevate by appointment Sue Campos from dean of health careers to vice president of academic affairs,” the letter states. “We certainly agree with the statement issued by the Triton Faculty Association critical of the process of appointing Sue Campos to such a critical senior level position without input from the campus community.

“We also see a troubling pattern emerging that began with the appointment of Debra Baker to vice president of academic affairs and continues with this recent appointment. However, as members of the Diversity Committee, our concern is not only with the process, but of the chilling effect it has on equity, diversity and inclusion.”

Krahenbuhl said high-level positions such as a college vice president are not given to anyone without a candidate search being done.

“This is so egregious. It is so far outside the normal accepted practice of academia,” the ninth year Triton faculty member said. “Most institutions go through great efforts to have search committees and bring in very diverse candidates to avoid the appearance of cronyism.

“It is really concerning that being transparent was not even one thing the college was concerned about. Such a significant position should not be filled by anyone except the very best candidate selected in an open and transparent process. This is not normally done.

“They can all say what a great person Campos is. How do we know that? Based on what? Who decided what criteria would be used in the selection process?

“The way they did this is just not done. Really good candidates are attracted to institutions of the highest integrity. That is how you get the best candidates. You want to have good educational practices. That is what good institutions do.”

Krahenbuhl noted that one member of the Diversity Committee, Jodi Koslow Martin, was not in favor of the letter being drafted by the committee.

Koslow Martin could not be reached for comment as of press time.

College President Moore and Brad Stephens, chairman of the Triton board of trustees, were also unavailable for comment as of press time.