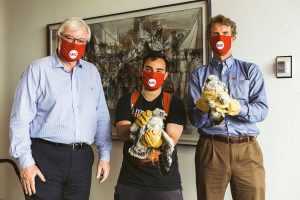 For decades, peregrine falcons have nested atop University of Illinois Chicago’s University Hall and everyone — from the UIC community to local Chicago elementary school students — has been able to watch them grow and welcome new additions through the livestream Falconcam.

“My students and I have been enjoying the peregrine cam — we’ve watched the incubation, the hatching of the chicks and now their rapid growth. The peregrines bring curiosity and excitement to our classroom,” said Samantha Bellgraph, a seventh-grade science teacher at Hayt Elementary School in Chicago.

This year, the female falcon — who is not banded so her identity is unknown — is nesting with male falcon Mouse, who has been part of a pair nesting at UIC in the past.

Their two chicks, one male and one female, were banded recently by scientists from Chicago Field Museum Bird Division. The event took place June 7 with a few specialists and enthusiasts watching and some even had the opportunity to hold the peregrines. The chicks were retrieved from their nest, banded and then put back until they are ready to leave the nest. The leg bands provide data on peregrine survival rates, dispersal distances, population growth rates and more.

“This event was like my 12-year-old self’s dream come true; it was just fantastic to see those magnificent animals up close,” said Professor Eric Stabb, raptor enthusiast and head of biological sciences.

Hazem Alkhan, a UIC student working on a capstone project focusing on bird-window collisions, was invited to the event and found the experience to be enriching, providing hands-on insight into important ornithological research.

“Being amongst researchers from the Field Museum and the American Zoological Association, standing alongside key players in the Chicago Peregrine Program, meeting the head of the department of biological sciences as well as the UIC Chancellor, and being able to hold one of the chicks of these celebrated birds, has made me feel truly honored,” said Alkhan, an ornithology enthusiast and undergraduate majoring in biological sciences.

Recently, a second nesting pair of falcons was spotted on the west side of campus. If they return, UIC will install a second FalconCam next year.